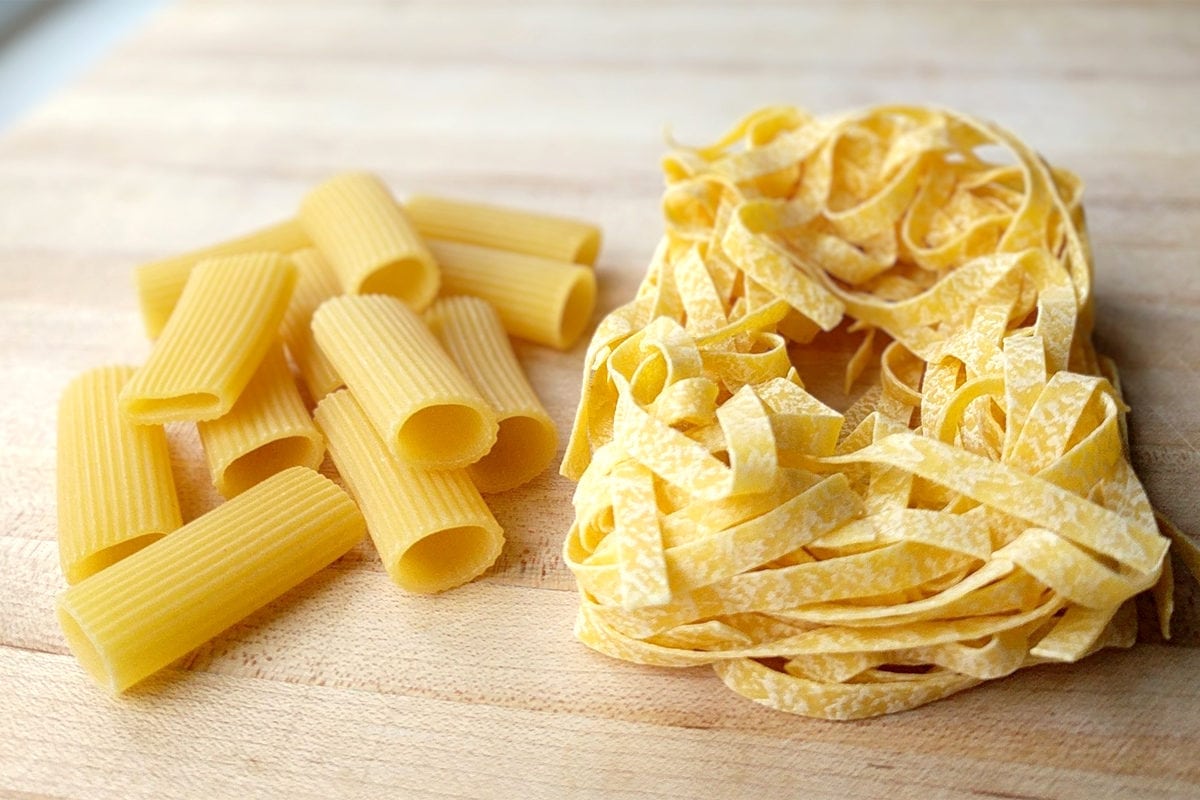 Pasta is probably the most recognized Italian dish. And for good reasons. Pasta plays a fundamental part in the diet of every Italian – even daily! This article describes all main pasta types.

Italians like pasta because they know it’s a filling meal that is easy to digest, a great option for the lunch break. The scientific reason behind this is in the high percentage of carbohydrates that pasta contains, a source of ready-to-use energy. Most Italians don’t believe in low-carb diets, since pasta and bread are so entrenched in their culture, although they do know that the excess of carbohydrates will show on the scale.

Now that we have the Atkins debate out of the way (probably the most controversial debate that we will ever have on this blog), let’s talk about the different ways to classify pasta (limiting to its more basic forms, and leaving some of its variations, such as gnocchi

Pasta can be short (‘corta’) or long (‘lunga’). Examples of short kinds of pasta are: maccheroni

.
Even though subtle, the shape, size, and thickness of pasta affect its texture on the palate, and the way it takes the sauce (hence the flavor). Because of this, tradition tends to dictate whether to choose short or long based on the preparation, in some cases even calls for a specific cut (e.g. in the case of penne all’arrabbiata

The shortest kinds of pasta are usually eaten in broth (‘pasta in brodo’), as opposed to in dry preparations (‘pasta asciutta’). ‘Mac and cheese’ is an exception where a very short pasta is used in a dry dish – this, however, is not a traditional Italian recipe.

Long pasta typically poses some “mechanical difficulties” to those that are not used to eating it. The proper way to eat long pasta doesn’t involve cutting it with a knife! Instead, it consists in rolling the strings around the fork (by rotating it in the hand), optionally using a spoon as support (although this is not common in Italy). Long pasta is known to splash the person eating it, especially if tomato or oily sauces are used. That’s the main reason why in Italy it is not unusual to see people in restaurants wearing napkins around their necks.

Pasta can be fresh (‘fresca’) or dried (‘secca’). Fresh pasta (either industrially made or hand made) is preserved by keeping it in the fridge in air-tight wrapping (and only lasts a few days). Dried pasta is industrially treated to remove its moisture and can be stored for quite a long time even if the box has been opened.

Because of its different texture and flavor, fresh pasta is considered more highly than the dried one, and on certain dishes, it’s almost mandatory. However, quality dried pasta has different properties that work well for certain dishes, and in every day’s cooking, it’s far more popular than the fresh one. Every Italian has their own favorite brand of dried pasta, and they are very loyal to it (the most popular ones are Voiello, Barilla, De Cecco).
Both dried and fresh pasta may or may not contain eggs. Egg pasta has a different flavor and texture that works well for some delicate preparations. Common cuts of egg pasta are tagliatelle, pappardelle, garganelli.

Pasta can either be boiled in abundant salty water, or baked in the oven. When boiled pasta is ready, it is quickly drained and served with a sauce (for best results, boiled pasta should be added to the sauce while still in the pan and allowed to rest in it for a minute). The boiling time is extremely important as you want the pasta to be “al dente” (for commercial pasta, most Italians simply follow the cooking time on the box). The expression “al dente” literally means “to the tooth”, indicating that the cooked pasta should be firm enough to require it to be chewed. The chewing process makes al dente pasta easier to digest than overcooked pasta. Pasta can also be boiled in broth and served in the same broth.

Baked pasta, on the other hand, is filled or layered with other ingredients, covered in sauce, and baked in the oven. If dried pasta is used, it gets sometimes lightly pre-boiled before going in the oven. Examples are: cannelloni

(not caneloni!), or the world-famous lasagna

Italian dried pasta is made exclusively with durum wheat semolina. Fresh pasta can be made of regular wheat semolina or even all-purpose flour. Durum semolina is high in gluten, and the pasta made from it holds the cooking much better, i.e. doesn’t overcook as easily as regular wheat pasta. Even the best durum pasta, however, don’t reheat well at all – no Italian would eat leftover pasta the next day. Baked pasta instead can be reheated (sometimes, Italians even bake their lasagnas intentionally the night before and warm them up the next day for a more uniform and intense flavor).

As mentioned, every boiled pasta is served with some kind of sauce, and the sauce has to be in a sufficient quantity to coat the pasta, and just a little more. It’s a common Italian habit to eat the sauce remaining in the plate with some bread. This operation is called ‘fare la scarpetta’, which literally means: doing the little shoe – shaping a chunk of bread like a small shoe and wipe the plate clean!

Regardless of the type of sauce used, grated Parmigiano (or in some cases aged Pecorino) is added (just before serving) pretty much to every pasta dish. A common exception is for sauces containing fish.

It is interesting to note that probably 50% of pasta sauces are traditionally vegetarian – this contributes to making Italy a vegetarian-friendly country.

Every Italian region has its own exclusive pasta sauce recipes, and it would be impossible to mention them all here. However, there are a few families of sauces that are popular all around Italy. Here is a list of them where every sauce is paired with its most typical cut of pasta.

Finally, I can’t help but mention the most common mistakes found in North America. You are likely not going to have an authentic Italian pasta dish if:

Also, if you are making pasta at home, using pre-made sauces from a jar is a big no-no. You can buy some OK pre-made Italian sauces, but they don’t compare with the freshly made ones and don’t have a big market in Italy.