Despite their Italian roots, these products don’t represent today’s Italian dining and, in that regard, they can’t be considered authentic. However, they are historically important and offer interesting clues on the North American interpretation of Italian food.

Probably the biggest Italian myth, widely featured in many Italian restaurants in North America, spaghetti with (big) meatballs are practically absent in Italy. Meatballs on their own, instead, with their many variations, are found almost everywhere in the country under the name ‘polpette’ (from ‘polpa’, pulp).

How did meatballs end up on spaghetti, then? A similar dish with small meatballs on noodles still exists in parts of southern Italy. As a possible explanation, with their arrival in the big American cities, Italian immigrants found a wider availability of meat and quickly switched away from their vegetable-centered diet. Their deeply rooted craving for pasta, however, didn’t abandon them. As the Italians were being assimilated into the American culture, they also started to favor a large single course (as opposed to multiple smaller courses) and more intense use of spices (especially garlic and oregano). This resulted in the combination of spaghetti and meatballs in a rich tomato sauce, which turned into the iconic dish known in North America.

Another big Italian myth is Alfredo sauce, along with its most famous use in Fettuccini Alfredo. The name “Alfredo sauce” is almost completely absent in Italy, although there are plenty of pasta sauces that are similarly based on the combination of butter and Parmigiano. For instance, egg noodles, gnocchi, and meatless ravioli (e.g.: with mushrooms, truffles, or ricotta and spinach) are often served with melted butter (sometimes infused with fresh sage) and grated Parmigiano. This type of finish simply goes under the name of “al burro”, with butter. In Rome, egg noodles with butter and Parmigiano are often called “alla Romana”, Roman-style.

Why is this sauce so famously called “Alfredo” in North America, then? The history behind it is well known, though parts of it are mixed with legend. In 1914, Alfredo di Lelio, a Roman restaurateur who was popular among American tourists, named his butter and cheese linguine after himself. According to the legend, the dish caught the attention of early Hollywood actors Mary Pickford and Douglas Fairbanks, who were in Rome for their honeymoon. When they returned to the US, the actors introduced the dish to their Hollywood friends, making it famous. In 1943 Alfredo di Lelio sold his restaurant, but the new owner kept the menu and is still in business under the name “Alfredo alla Scrofa“. In 1950, Alfredo di Lelio and his son opened a new restaurant in a different location and called it “Il vero Alfredo“, the real Alfredo, which is now managed by Alfredo’s nephews. Both restaurants are popular with North American tourists that want to taste the original Alfredo recipe. Besides these two restaurants, in Italy, “Alfredo” is just a first-name (Alfred).

As one can easily imagine, there is nothing called “Italian soda” in Italy. And there is also nothing that tastes like it. Italy only has a handful of traditional sodas, the main ones are ‘aranciata’ (orange-based), ‘gassosa’ (clear, intensely sparkling and with a sweet lemon flavor), ‘cedrata’ (from the citron fruit), and ‘chinotto’ (based on the uniquely flavored chinotto citrus). North American “Italian sodas”, instead, come in a wide variety of flavors (e.g.: cherry, raspberry, pomegranate, grape, peach, strawberry), all of which tend to be sweeter and more intense than their Italian counterparts.

How did Italian sodas happen, then? Probably from the Sicilian tradition of making refreshing drinks by pouring small amounts of concentrated syrups in iced still or sparkling water, or on shaved ice (which is what the Italians call a ‘granita’). The most popular flavors are lemon, mint, tamarind, ‘orzata’ (almond flavored), and ‘amarena’ (from sour black cherries). It appears that the Torani Company, a famous syrup maker from Italy, introduced Italian sodas in 1925, in San Francisco, by adding their syrups to soda water. The drink that resulted was well received by the American palate, and more flavors were then added.

If Italian soda is not really Italian, then “Italian cream soda” is even less so! Industrially made cream soda is usually flavored with vanilla, a pastry-like aroma that would be strange to Italians in a drink. In some North American bars and cafes, cream soda is made by adding cream to carbonated water, which sounds even stranger if not utterly disgusting to any Italian. 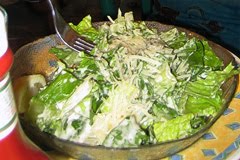 With absolutely nothing to do with the well known Roman emperor, numerous sources trace the creation of Caesar dressing back to the 1920s and attribute it to Cesare Cardini, an Italian immigrant who owned restaurants in California and in Mexico. According to the legend, chef Cardini came up with his famous dressing by combining leftovers that he found in his kitchen: romaine lettuce, olive oil, garlic, raw egg, lemon juice, Worcestershire sauce (which is lightly flavored with anchovies), and Parmesan. The dressing quickly became popular with visiting Hollywood’s celebrities and Cardini expanded his business into large-scale production. In 1948 Cardini trademarked his recipe, but he couldn’t patent the “Caesar Salad” name because it was already entrenched in popular culture. When he died, his daughter Rosa took on the business and worked on expanding the Cardini brand, which she then sold to a third party.

Despite the fact that the flavors in Caesar salad meet the Italian palate, this dish is unknown in Italy except for a few restaurants that cater to a North American clientele.

Italian wedding soup is a completely misrepresented dish, not as much for the “Italian” adjective, but for the “wedding” one. There is no wedding soup in Italy – soups are generally humble dishes that lack any festive connotations. The name, in fact, likely comes from a mistranslation of ‘minestra maritata’, married soup, in which vegetables (escarole, cabbage, endive) and meat (sausage or meatballs) symbolically marry in one single dish. 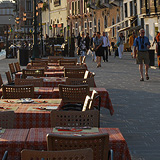 Although the Italian words “al fresco” are a common way to say in the freshness of the outdoors, the association between “al fresco” and outdoor dining is not particularly strong in Italy. In the hot Italian summers, dining outdoors is a treat for many. As a result, restaurants often feature patios and gardens or obtain authorization to set up tables on the sidewalks. Despite this, the phrase “mangiare all’aperto”, eating outside, is far more common than “mangiare al fresco”, possibly because “al fresco” also carries the negative connotation of meaning in jail.