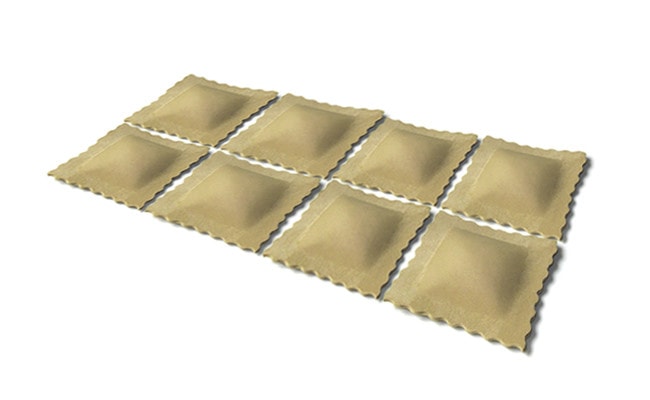 The word ‘ravioli’ (plural of ‘raviolo’) refers to all kinds of filled Italian pasta where a thin layer of dough wraps around a filling (‘ripieno’, in Italian). Ravioli are either boiled and dished out with sauce (a popular first course) or served in broth (a classic dinner option, especially during winter). The pasta layer, generally egg-based and rolled into a thin sheet, serves as more than an enclosure – it overextends around the filling and binds with the sauces or gains flavor from the broth. Common fillings may include anything from meat, to cheese, to vegetables and vary greatly among the countless regional recipes. Special types of deep-fried sweet ravioli also exist, perpetuating a tradition that goes back to the earliest written documents on filled pasta.

The recipe book “Liber de Coquina” (Naples, end of 13th century) defines “torta” as a thick pie shell used as a sealed pot and not meant to be eaten. The torta was filled with a mixture of minced meat, grains, vegetables, and spices, and placed in the bread oven(1). Large and elaborate versions of the torta – made of multiple layers and decorated with plums – were served in important banquets, whereas simpler preparations were accessible to everybody.

Inspired by the idea behind the torta, pasta makers started to incorporate similar types of fillings into their pasta shapes. The word ‘tortello’ (small torta) was used to refer to the pasta enclosure, whereas the word ‘raviolo’ (probably from late Latin rabiòlæ) was generally used to refer to just the filling. In addition to being boiled and served with sauces, the savory-filled tortelli were also fried and served with sugar and honey(1).

As a testament to its ancient origins, filled pasta changes name and often also shape, size, and fillings based on the region of Italy. Here is a list of the most popular kinds:

16 thoughts on “Ravioli: the Food of Kings and Peasants”