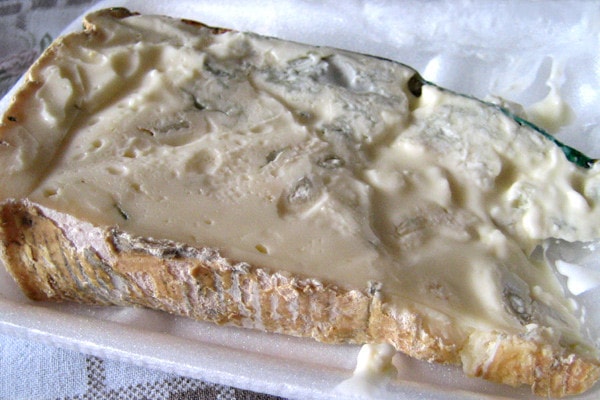 If you like blue cheese, but you haven’t tried Gorgonzola (

), you’re going to love it. If you don’t like blue cheese, and you try Gorgonzola, you might very well start to like blue cheese! In fact, next to the traditional Piccante (pungent) variety, the milder Dolce (sweet) variety meets the palate of those who are not too fond of ‘blue’ flavors.

Check out the latest episode of Thoughts on the Table, the podcast on food and food culture. Also available on iTunes and Google Play Music.

The characteristic pungent aroma of Gorgonzola Piccante is due to the aromatic molds that, over a 6 month aging period, grow to fully inhabit it. As the cheese ages, it becomes compact or even crumbly because of its natural loss of moisture (down to 30-40%). This transformation also intensifies the flavor.

The Dolce variety instead (shown in the feature image) is only aged 2 to 3 months: it has only partially established molds and still contains high amounts of moisture (45%). This results in a cheese that is only mildly blue, and that is also creamy and spreadable.

Both the Dolce and the Piccante varieties are made from whole cow milk, and they have similar percentages of fat (around 25-30%).

Cheese production makes use of specific kinds of molds (Penicillia) that over the centuries were discovered capable of improving the flavor and the texture of the product. We now know that these molds are aerobic fungi that produce enzymes capable of metabolizing the milk fats and proteins, therefore completely transforming the cheese. These molds are perfectly safe to eat since they don’t release any toxins and even have antibacterial properties. The antibiotic penicillin, in fact, derives from a mold that belongs to the same family.

Out of all of the different kinds of Penicillia, only two are responsible for the characteristic flavor of the countless varieties of blue cheese: Penicillium glaucum and Penicillium roqueforti. Gorgonzola is traditionally made using the former, but the latter can also be used.

Molds are often associated with cheese, but in most kinds of cheese, they grow only on the rind. In blue cheese, instead, the mold is encouraged to grow deeply into the cheese paste. Since Penicillia need at least minimal levels of oxygen to survive, in the production of Gorgonzola, the uncooked curds are left unpressed to favor the formation of fissures and cavities through which the mold will be able to breathe. In order to get an even more uniform growth of the mold within the paste, when the cheese is 3-4 weeks old, the rind is perforated deeply with metal needles. The mold ends up thriving on the walls of the holes, forming the characteristic green veining. In Italian, this process is called Erborinatura from the word ‘erburin’, which means ‘parsley‘ in northern Italian dialect, in reference to the similarly green color.

The exact origins of Gorgonzola are unknown, but they certainly revolve around a city that bears the same name, 15 km East of Milan, in the core of Lombardy.

As early as in the 9th century, Lombardy was known for the production of a soft cheese called stracchino(1). There is evidence that the stracchino made around the town of Gorgonzola developed special characteristics that made it unique – likely it was contaminated with a particular mold which is naturally present in the caves where the cheese was ripened. The “stracchino of Gorgonzola” started being appreciated as a different kind of cheese, a delicacy that then became known in all of northern Italy.

Over time, the production of Gorgonzola expanded to other parts of Lombardy, but the city of Gorgonzola maintained its prestige until the middle of the 19th century. In 1840 writer Luigi Cattaneo wrote in his Milanese publication: Il Politecnico that “while the cheesemakers of the town of Gorgonzola kept the secret of the peculiar circumstances that make this cheese special, this cheese remained their almost exclusive privilege. But nowadays this cheese is produced in several other locations in Lombardy with the same good success, although the one that is made in the surroundings of Gorgonzola maintains higher commercial regard.”(2)

Since 1970, the production of Gorgonzola is regulated by its Consortium, and it’s limited to specific areas of Lombardy and Piedmont, as stipulated by its designation of Protected Geographical Status.

Gorgonzola is commonly eaten by itself, usually spread on bread. The aged variety (Piccante) is sometimes paired with honey to counterbalance its intense body. For those who prefer more delicate flavors, a modern preparation exists that is even milder than Gorgonzola Dolce: a “cake” made by layering sweet Gorgonzola with mascarpone.

Gorgonzola is also widely used in cooking. The main examples see it used:

The wine pairings of Gorgonzola are somewhat difficult and a source of lengthy debates. There seems to be consensus, however, that the Dolce variety goes with fruity wines (Riesling, Pinot bianco, various novelli). The Piccante variety, instead, needs a stronger, sweeter wine, even fortified: various kinds of passito, as well as Port and Marsala. All agree that Gorgonzola goes well with beer, especially the Trappist kind.

1) Stracchino is a fat cheese whose name derives from the word “stracco” (“tired” in Milanese dialect), in reference to the fact that it was made with the milk of cows that were “tired” because of having just returned to the valley after spending the summer on higher pastures.
2) Luigi Cattaneo, On the way to produce the fat cheese called Stracchino of Gorgonzola, Il Politecnico 3 (1840), p. 309-322.

Pola (An Italian Cooking in the Midwest)

26 thoughts on “Gorgonzola – The Italian Blue”