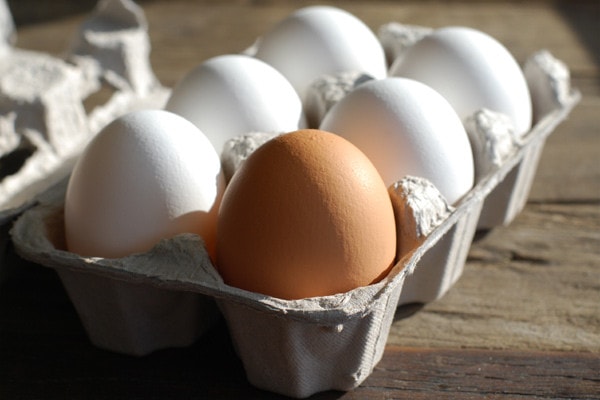 Chicken eggs are one of the world’s most popular foods and have a significant presence in the diet of both Italians and North Americans. However, their aspect and the way they are consumed are substantially different between Italy and North America. In this article, I will list 5 of these differences, while also describing why eggs are an essential ingredient in cooking and a marvel of nutrition.

The first most obvious difference is in the color of the shell. In Italy eggs are prevalently brown; in North America, prevalently white (difference #1). What causes this difference? The color of the shell comes entirely from the breed of the chicken: white hens make white eggs, red and brown hens make brown eggs. So are Italian chickens indigenously brown? No, they are chosen by the breeders according to the preference of the market.

It’s interesting to see how the shell color preference varies around the world. As illustrated in the map below, it doesn’t have any obvious correlation to the geographical location – it varies more based on culture.

What about the color of the yolk instead? That depends entirely on the hen’s diet. If the hen is fed plants rich in xanthophylls (such as alfalfa or yellow corn), the yolk acquires a darker color. So, is Italian feed more conducive to producing orange yolks? Not really, similarly to the breed, the choice of the feed is driven by the preference of the customers: North America seems to prefer lemony-gold yolks, whereas Italy and most of Europe goes for deep orange yolks.

Nutritionally speaking, all eggs are identical being designed to nourish the embryo until the chick hatches after 21 days of incubation.

Within the egg, the yolk and the white have substantially different properties and nutritional values, however. The yolk weighs about 1/3rd of the whole egg and contains ¾ of its calories in the form of proteins and aggregates of proteins-fat-lecithin. These aggregates give eggs their emulsifying properties: the amazing capacity to bind with both fat and water to create wonders like mayonnaise and Hollandaise sauce.

The egg’s white (or albumen) contains a similar amount of protein as the yolk, but the majority of those proteins actually have anti-nutritional value when eaten raw. While they are nourishing for the embryo, they inhibit digestive enzymes and prevent the absorption of vitamins and iron. The egg white also contains ovomucin, a protein with thickening and binding properties meant to protect the developing bird. Ovomucin is also very valuable in cooking: it helps keep together cakes and certain kinds of pasta (e.g. tagliatelle and lasagna), stabilize foams, and give a shiny finish to pastries.

Eating raw eggs is discouraged in North America. This isn’t because of the anti-nutritional properties of raw egg white, but because of the fear of Salmonella, a bacterial infection that can have serious health consequences.

Both Europe and North America have been exposed to Salmonella outbreaks, but they have adopted different strategies to counteract them. In 1998, the UK introduced a program called the “British Lion Code of Practice“. The initiative certifies egg farms that adhere to a stringent code of practice, which includes: vaccination for the hens, complete traceability of the animals’ origins, and complete traceability of their feed. It also mandates that each egg is individually marked with a code identifying the expiry date, the farm of origin, and the keeping of the hens (free-range, barn, or cage).

Since 2004, egg marking has been adopted by the European Union.

Despite overall improvements in the conditions in which hens are kept, North America still doesn’t apply the same stringent regulations and Salmonella infections are still quite common. As a result, North Americans are wary of raw eggs and the US FDA strongly recommends cooking eggs through or using pasteurized eggs. In Italy and in the rest of Europe such fear is much less prevalent (difference #2). Raw eggs are also traditionally part of popular preparations, such as homemade mayonnaise and Tiramisu, which makes them more culturally accepted.

The fear of Salmonella also causes the next difference (difference #3). By law, in the USA and Canada eggs must be refrigerated in supermarkets and grocery stores. This policy is motivated by the fact that a contaminated egg is mainly harmless until the bacteria have had a chance to multiply and colonize the egg, a process that is slower at low temperatures.

Italy, the UK, and other parts of Europe don’t have mandatory refrigeration. As a matter of fact, they have the opposite policy: refrigeration is forbidden until the eggs reach their final storage destination (the home fridge). The reason for the different policy lies in another important difference: in Italy eggs are unwashed! (difference #4) When eggs are laid, they are naturally covered with a thin film that makes the shell less porous and isolates it from bacteria that are present in the hen’s intestinal tract. This film helps preserve the egg by maintaining more of its water content, by avoiding CO2 perspiration (a byproduct of the loss of acidity that occurs when the egg ages), and by isolating the egg from off-flavors that it could absorb from the environment (e.g. the smell of other foods in the fridge). This protective film can easily be washed away by the natural condensation of the moisture in the air as it comes into contact with the cold surface of a refrigerated egg. Condensation is particularly harmful because it won’t just wash off the protective film, it will actually melt it in place and allow any bacteria that is present on the surface of the egg to get inside. It’s customary for Italians to wash eggs before using them should the shell comes into contact with the egg’s content during cracking.

Despite the differences in the hens’ breed and feed, eggs taste the same in Italy as they do in North America. However, traditionally, their role in the diet differs substantially. In Italy, eggs can be found, in various preparations, as lunch or dinner options. In North America, instead, they are mostly associated with breakfast (difference #5).

The names of the different cooking styles have creative translations in Italian:

IncredibleEgg.org has excellent instructions on how to properly cook eggs in any of these styles, and others too.

As described in the article “Breakfast or Colazione?“, Italians prefer to start their day with something baked, along with coffee or cappuccino. Fried eggs, instead, are seen as an informal meal, often prepared in a frittata (from ‘fritto’, fried, generically indicating a dish in which eggs are cooked in a pan on a layer of fat). To prepare a frittata, the eggs are beaten with salt and pepper, and sometimes a small amount of milk or water. Often, additional ingredients are mixed in, either individually or in combination. Common add-ons include vegetables (e.g. onions, mushrooms, zucchini, asparagus – all sautéed in advance), cheese (e.g. Provolone, Taleggio, Fontina, grated Parmigiano), and meat (prosciutto cotto – the Italian ham -, salame, sausage). In a frittata, the eggs can either be scrambled or set. When set, the thickness can vary between a few millimeters (like in a French omelet), and a few centimeters (like in a Spanish omelet).

Other than in frittata, eggs are the main component of a number of other Italian dishes:

The following instead are uses that are almost exclusively North American:

Finally, these are uses that are common between North America and Italy: