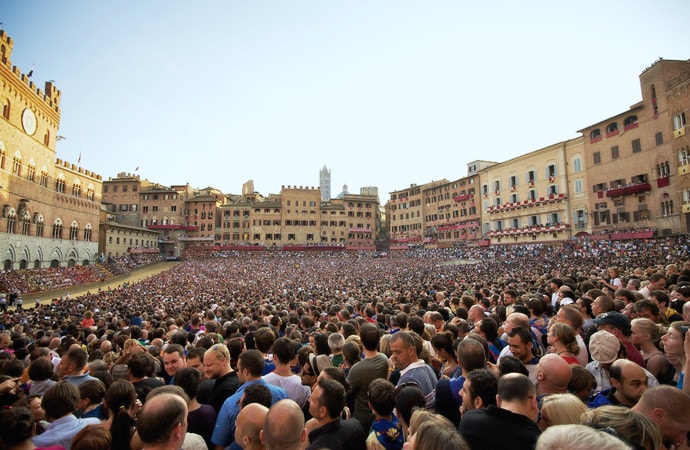 Proxemics, the study of interpersonal communication, defines “personal space” as the cylinder of air surrounding each person which people consider as an extension of their body. The personal radius is largest between strangers and shrinks down the more people know one another, reaching zero (physical contact) for parent-child relationships and for couples. The personal radius also varies according to the difference in social ranking: individuals seem to demand more personal space when surrounded by people that they consider of lower social status, as a form of respect they think they deserve.

In North America, the standard socially acceptable distance between acquaintances having a conversation is around 4 feet. In Italy, instead, the norm is 2-3 feet(1), a distance that North Americans tend to reserve for intimate relationships. In Italy, it’s also common for people to establish extended physical contact when having an exchange. For instance, a person may reach for a friend’s forearm as a way to communicate openness and honesty or walk arm in arm with a coworker (of any gender) as they discuss something confidential.

The difference in the amount of personal space that people require can also be seen in the way they greet one another. In Italy, especially in the south, the double kiss on the cheeks is the standard greeting between acquaintances, not the business-like handshake. In North America, the hug (which is the equivalent of the double kiss) is instead reserved for close friends and family.

When forced in a tight environment such as an overcrowded transit vehicle, people adopt strategies to cope with the invasion of personal space. A theory is that they start to see others as lifeless(2), avoid eye contact, and wear their don’t-talk-to-me face. But things get even more interesting when there is enough space for people to decide how to arrange themselves, but not enough for them to fulfill their personal space requirements. This is the case for instance in a 10-person occupancy elevator, with 6 people in it.

The higher tolerance of Italians for an invasion of their personal space also reflects in their inclination to violate somebody else’s. As an example, when queuing up in a crowded post office, it’s relatively normal for people to end up shoulder to shoulder or in physical contact with the person in front, leaning against them slightly as to apply a gentle push (perhaps under the unconscious assumption that it can make the line go faster). This can also be observed when people crowd towards the counter when waiting to order their espresso, an operation which requires catching the barista’s eyes as soon as they inquire into who’s next.

But what is the cause of the different social behaviors and the varying level of interpersonal contact? One theory is that less personal space may be the result of living in densely populated cities. But this is not a sufficient condition. The Japanese, for instance, live in even tighter spaces than the Italians, and yet they are notoriously a no-contact society.

A more likely theory is that the populations of southern Europe and Latin America belong to highly expressive cultures traditionally devoted to living a communal life centered around churches and piazzas. This is likely due to the necessity of helping one another in regions of scarce resources and facilitated by the clemency of the weather. People belonging to these populations have become accustomed to collaborating with one another, which has made them emotionally and physically closer.

Besides the need for interaction, the tendency to grab people’s arm and pull them closer during a conversation may also derive from the necessity to be discrete when sharing private information. In that regard, a great example of confidential exchange is the one that catholic Italians are exposed to during confession, a sacrament bound to secrecy which requires the penitent and confessor to come close and whisper to one another.

But personal space can also be violated from far apart. This can be seen for instance in the way some Italians choose to be overly loud in public. Even if they are having a business conversation on the phone, they may raise their voice and begin gesticulating in order to establish their territory. In doing that they project confidence and power, they establish their social status and therefore enlarge their personal space.

There is one place, however, where Italians seem to require more privacy than North Americans: public toilets. In North America, the stalls are often only partially enclosed and the urinals can be side by side without any screens between them, or they may even be replaced with a communal trough. In Italy, instead, public bathrooms are often built with urinals that are well divided and stalls that are fully enclosed. One possible explanation for this difference is that by building open bathrooms, people are forced not to take advantage of these spaces as if they were personal (e.g. to conduct something illegal or immoral in it). Italians instead are less concerned with illegality or immorality, they care more about how they appear in public and therefore demand more privacy when they can’t look at their best.