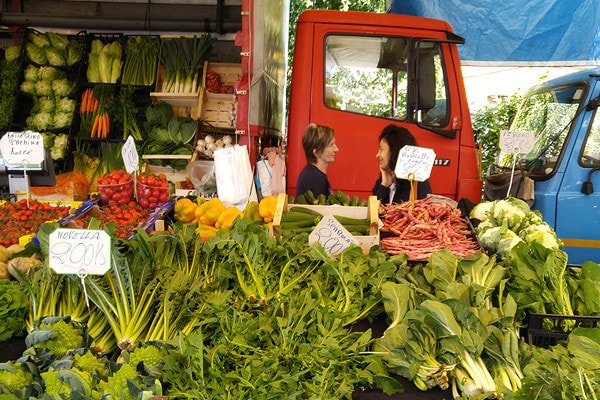 ~~~ This article is available in narrated version. Check it out! ~~~

Every year, when I go back to Italy to see my family, I manage to squeeze in a visit to a mercato. As you may have guessed, the word “mercato” means “market”, but what’s a mercato (plural: mercati) to the Italians? I asked several friends from various parts of Italy to help me define it – the article you’re reading includes their collective observations.

The mercati are traditional neighborhood street markets that take place in most Italian municipalities and are as ancient as the cities themselves. Small towns tend to have a weekly mercato (on alternating weekdays among bordering towns) in a designated street or square (often called “Piazza Mercato“). Bigger cities instead tend to have several neighborhood mercati, some of which may occur daily (on weekdays and Saturdays) and take place in permanent structures that are either partially or fully covered (mercati coperti).

In the mercati, street vendors set up their movable shops to cover a complete range of needs: from food, to clothes, to household items. The stores are generally open from early morning until early afternoon, but in big cities or for special occasions (e.g. patron saint feasts or Christmas celebrations) they may remain open until late. The mercati feature products for all budgets, from affordable consumables to high-quality designer items. Bargaining is acceptable though not as common as it was in the past, with the newer generations of customers being more used to posted prices.

“At the regular neighborhood market, you can buy all sorts of things, bargain, and you can also find prestigious brands and products, such as leather boots.[…] In Turin, there’s the biggest open market in Europe: Porta Palazzo which has a covered area for meat, pasta, and fish.” Lucia

“Bologna has a covered market in the city center (The Herbs Market – Mercato delle Erbe), some permanent markets in the style of Alger’s kasbah (via Pescherie’s market […], Aldovrandi’s square’s market) and some temporary markets […], plus a number of neighborhood markets all over the city.” Nando

“In the past, all cities had covered markets. Now in the Emilia region, the only famous market left is Modena’s – a spectacular market with a lot of high-quality foods […] [which are] also sought after by tourists.” Ilaria from Ilaria’s Perfect Recipes

Even though supermarkets have become the main source of supplies, the mercati remain popular in Italy. One reason for their appeal is the reliable quality and competitive prices of their fresh produce. Italians are very demanding when it comes to food and select vendors based on an expectation of high quality and fair value. Since in the mercato vendors strive to form long-term relationships with their customers, they must honor such expectations.

Another reason for the popularity of the mercati is that small towns may otherwise not have enough stores to supply the local demand. This phenomenon has become even more significant in recent years since many small businesses closed due to the financial downturn and competition from out-of-town commercial centers and department stores.

Aside from the merchandise itself, however, a big part of the appeal of the mercati lies in their social function of being outdoor gathering places where people can meet. Those who visit a mercato are greeted by a cheerful atmosphere derived from the variety of merchandise and the excitement of bargaining. In small towns where the mercato only occurs weekly, the infrequency of the event intensifies the excitement.

There are mercati that specialize in a certain genre of merchandise, such as the famous “mercati del pesce” (fish markets) that are commonly seen in coastal cities, or the “ortomercati“, which are dedicated to fruit and vegetables. But the multipurpose mercati are the most common. In those, vendors are loosely grouped together by type, with fresh fruit and vegetables stands taking on the most prominent section.

In most mercati, the space next to the produce is reserved for bakeries and deli trucks (selling fresh pasta, cheese, cold cuts, olives and other preserves, roasted chickens, and pre-made dishes). A few butchers and some fish trucks are also commonly seen in that area. As we move away from the core, the merchandise switches to clothes, including pajamas and underwear, as well as shoes and accessories such as belts and wallets. Then, it’s the turn of household items, including linens, curtains, mats, as well as hardware, tools, and cleaning products. Sometimes plants, seeds, and even birds, and other small pets can be found as well. Finally, in recent years, “coffee trucks” have been making an appearance even in small mercati, offering espresso and cappuccino, as well as croissants, pastries, sandwiches, and pizza by the slice. Some even feature a dedicated seating area.

Even though the produce sold in the mercati is often local, vendors may rely on nationwide distribution chains, and as such the mercati cannot be considered as farmers’ markets. In some big Italian cities, however, actual farmers’ markets have started to appear as stand-alone venues or as distinct sections in regular mercati. Just like in North America, farmers’ markets are associated with smaller production volumes, organic farming (agricoltura biologica), fair trade, and consequently higher retail prices. In Italy, however, farmers’ markets are still relatively uncommon, possibly because the majority of the Italians consider regular produce to be just as healthy.

“In Milan, the first farmers’ market, organized by Coldiretti [a national agricultural organization] opened in 2008 in the headquarters of the farmers’ cooperative (Consorzio agrario) of Milan and Lodi. The number of farmers’ markets reached 120 in Lombardy in early 2013.” Simona from Briciole

“As for second-hand/antiques, in the area of Porta Palazzo there’s the Balon market, which has some rare pieces. The “Gran Balon”, takes place the second Sunday of every month, and there you really have the chance to find treasures.” Lucia

“Then there’s the «small» antique market of Santo Stefano’s square in Bologna [the second Sunday of each month, and the preceding Saturday].” Nando

In order to occupy a spot in the mercato, vendors need to apply for a permit with the city. During each mercato day, the municipal police go through the aisles to check that every vendor has paid their occupancy fees. They also check that there are no unauthorized salesmen offering merchandise of dubious origin (brand name imitations) or simply items of little value and high return margins such as lighters, string bracelets, plastic sunglasses.

In recent years, Italy has seen a sharp influx of immigrants. This new multiculturalism affects the mercati by more imported items being sold, and new vendors taking over some of the businesses. Some of those long-term relationships with the familiar vendors have been lost, and until new ones are established the mercati in some towns must wait to regain their neighborhood identity.

Some markets, however, have strongly maintained their traditions. This is the case, for instance, in the yearly fairs that many towns hold to honor their patron saints. Years ago, these town fairs were often the setting of small cattle shows (fiere del bestiame). Nowadays, instead, they are essentially big mercati, but with an emphasis on delectable and extravagant products such as cheeses and salumi from the various regions of Italy, marzipan fruits, torrone (nougat), croccante alle mandorle (almond brittle). You can also find an abundance of ornaments, toys, and even the latest kitchen gadgets! Some yearly fairs may also host traveling funfairs (giostre), with elaborate carnival rides.

Other yearly fairs, instead, celebrate a seasonal harvest and are sometimes called “sagre” (festivals). The products that are showcased may be sampled in dedicated food tasting stands (which are sometimes equipped like full restaurants) and are generally available for purchase at wholesale prices. For instance, the world-famous white truffle fair is held every fall in Alba, near Turin.

“[There are] also fairs that are centered on seasonal products. For instance, near Turin in October there’s the pumpkin fair.” Marta“They have fairs dedicated to some specific local food and its gastronomic specialties for each area. […] These are more like restaurant-style gastronomical stands (e.g. the truffle festival – “sagra del tartufo”, the garlic festival, the festival of the pear, of the asparagus, of the cappellaccio [a pumpkin-filled dumpling characteristic of the town of Ferrara], etc. […] You order food to be cooked by locals (renowned for their traditional cooking knowledge) and you sit at communal tables to eat.” Ilaria from Ilaria’s Perfect Recipes

“Every year in Perugia there’s the Fair of the Dead, which dates back to the Middle Ages.” Simona from Briciole

Finally, a different kind of seasonal market is, of course, the one that is held in many towns during the Christmas period. Mercatini di Natale (Christmas small markets) are especially dear to the Italians, in part for their whimsical atmosphere. Like other winter markets, they often feature warm treats including roasted chestnuts and mulled wine (vin brule). Naturally, they also focus on giftable items such as fine foods, clothes, accessories, and crafts.

“There is the Christmas market under the Portico dei Servi (which lasts from Santa Lucia, – December 8, but it opens on December 6th -, until January 6th) and the market of independent artisans [called] «Decomelart» in via San Giuseppe and one of sweets and random gadgets in via Altabella.” Nando

“Christmas markets are mostly located in northern Italy but are not absent in the south. You can check out the website: mercatini-natale.com for a list of the locations.” Ilaria from Ilaria’s Perfect Recipes

“The Christmas market that I know best is the Fair of the “Oh bej oh bej” that is done in Milan for Sant’Ambrogio [the city’s patron saint, on December 7th].” Simona from Briciole