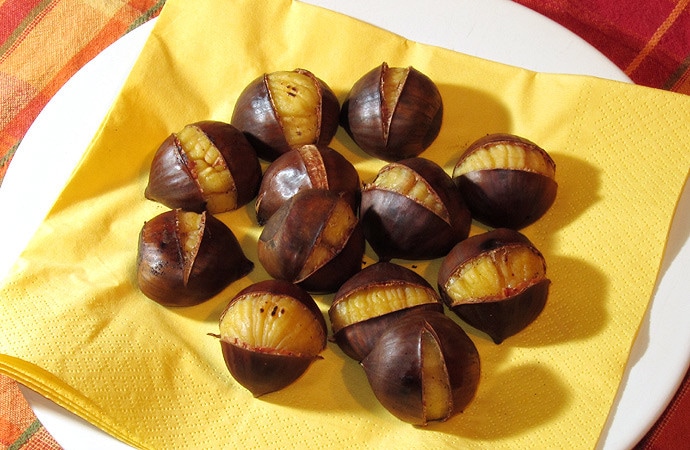 Nicknamed ‘caldarroste’ in Italian, roasted chestnuts are a great segue in the series of seasonal classics. Traditionally, caldarroste are fire-roasted in a holed pan, but they can also be made at home – in the oven or, as described in this recipe, on the stove.

Cooked chestnuts have a unique mealy texture thanks to their high content of starch and low content of oil, compared to other seeds, and are considered a true delicacy. In late fall, chestnut-gathering is a common leisure activity in the vast spontaneous chestnuts groves (‘castagneti’) that can be found all throughout Italy. During their season, cultivated chestnuts can also be found at greengrocer’s shops. In big cities, roasted chestnuts are commonly sold by street vendors, especially around the holidays.

Before roasting, chestnuts need to be prepared with an incision on the skin (as shown in the picture). As the chestnut cooks, the cut will allow the vapor to escape and the skin to open up as it shrinks – when the chestnut will be fully cooked, the skin will come off easily.

Chestnuts can be roasted on the gas burner in a holed aluminum pan used directly on the flame. On the electric burner, good results can be obtained by using a large stainless steel pot, at a high temperature. As the skin starts to burn, keep tossing the chestnuts around for 15-20 minutes, depending on the size. Two or three times during the cooking time, toss a tablespoon of water into the pot and place a lid on it for a couple of minutes to steam the chestnuts and help them cook more uniformly. Chestnuts can also be boiled in water for 30-40 minutes, in which case no incision is needed.