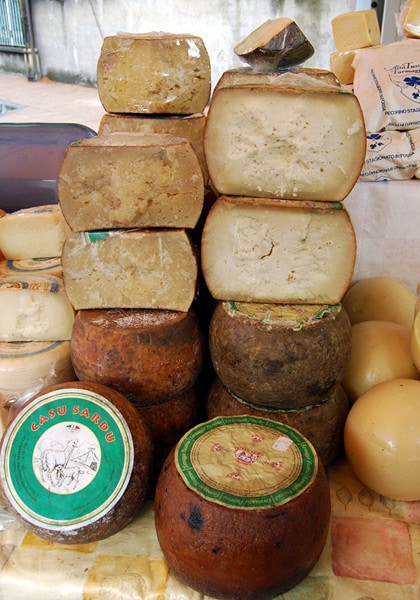 Even though Italy is a pretty small place, its regions are quite different from one another. And cheese (formaggio

, in Italian) is one of the products that changes the most across the territories. Since the area of origin is a big part of what defines each cheese’s properties, many Italian cheeses have a protected denomination under European Union law (PDO – “Protected Designtrecciation of Origin”, or DOP – “Denominazione di Origine Protetta” in Italian). For a cheese to be labeled as PDO, every step of its production needs to happen in a specified geographic area: from local cows eating local hay, through production happening entirely in local facilities, to aging (or, for fresh cheeses, just packing) occurring rigorously in place.

Since Italian cheese names are so representative, in Italy they are never used as adjectives. For instance, you just say Mozzarella

, not formaggio Mozzarella. And this even when the cheese name is indeed an adjective (for instance in the case of Parmesan which means ‘from the city of Parma’ – in Italian you just say Parmigiano

, in English Parmesan cheese is instead more common). It has to be noted, however, that the name alone doesn’t guarantee the origin. For instance, “Mozzarella” isn’t a PDO cheese per se, while Mozzarella di Bufala Campana is (http://www.mozzarelladop.it/).

Specialized cheese stores in North America can provide a good sampling of the most important cheeses found all around Italy. However, even the best stores are incapable of handling fresh cheeses (some need to be consumed within 3-4 days from their preparation), and locally made equivalents are sometimes sold instead (although, generally, they don’t compare with the originals).

Cheese is considered very highly in Italy. Italians are very proud of and take their cheeses very seriously. They use them in their cuisine, but mostly eat them on their own, just with some bread or accompanied by fruit (pears, grapes), by compotes (figs), or kinds of honey. All aged cheeses go very well with wine. Often, cheese is a course on its own (served at the end of the meal, before fruit or dessert). Eating Italian cheese is a true multi-sensorial experience, from the look, to the aroma, to the deeply multi-faced flavor. And, with the many varieties found from north to south, cheese is also a fascinating journey, both geographically and historically.

Let’s go over the main Italian cheeses, classifying them by the process used to make them.

One characteristic of Italian cheeses that definitely stands out in North America is that they often have some kind of moldy rinds. In general, the rinds are not meant to be eaten (with a few exceptions, e.g. scamorza and provola which have edible rinds), but they are essential for the aging process. Italian stores, whenever possible, try to keep the cheese wheels whole and only slice them to order (this is especially true for fresh or medium ripened cheese; aged cheese gets more “stable” and better maintains its properties when stored).

Even though Italy is a big producer of cheese, a few foreign brands managed to make their way into the Italian cheese market, with moderate success. For instance, in 1971 the American Kraft introduced Philadelphia, a pre-packed cream cheese, and in 1975 a type of cottage cheese (sold under the brand name “Jocca”). Kraft also introduced a kind of processed cheese slices called “Sottilette” (Italian for “thins”). It has to be noted that the words “cottage cheese” and “cream cheese” don’t even exist in Italian, let alone “processed cheese” – these products are exclusively known by their brand names (to Kraft’s advantage).