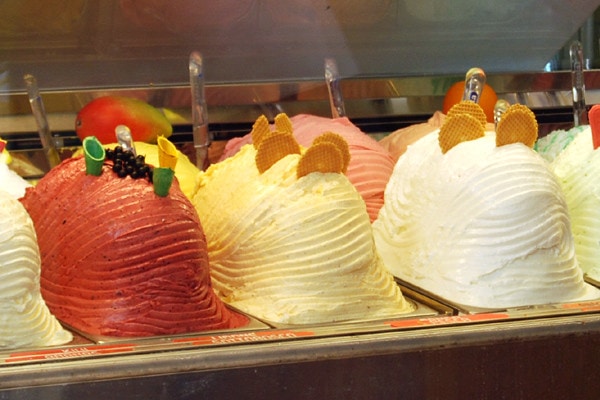 Gelato is not Italian for ice cream. In Italy, the word ‘gelato’ (plural: ‘gelati

‘, literally meaning ‘frozen’ and with nothing to do with gelatin) refers to a product that resembles ice cream, but that is technically quite different, especially in its artisan version.

Gelato is based on a custard typically made with egg, sugar, and whole milk (though there is also a variation called ‘sorbetto’ that doesn’t contain dairies). The hot mix is then allowed to slowly cool off for the water to bind with the milk proteins and ultimately give smaller crystals when frozen. Real fruit, chocolate, nuts are then added as flavors. The freezing process happens in small batches in a mixer, and this incorporates air increasing the volume by 25-30%. Gelato should be stored at a temperature between -10 and -15 °C and consumed within a few days.

Ice cream is usually made with half cream and half milk, normally through a cold mix process. The production lines work in air to double the product’s volume. Ice cream is stored at a temperature around -20 and -25 °C and can last for a few months.

What is served as ‘gelato’ is not likely to be authentic if:

What is gelato to the Italians?

So, now that we know how to differentiate ice cream (or bad gelato imitations) from authentic gelato, let’s talk about what gelato really is for the Italians.

Gelato is a dessert, a refreshment, a summer treat, and even a small meal. The main place to get gelato is in a ‘gelateria’ (gelato parlor). Gelaterie are very common all throughout Italy, but especially in those cities where it gets particularly hot during the summer. During winter, the ones that stay open often only have limited flavors, or even alternatives such as ‘gelato caldo’ (warm gelato, a relatively new invention which is more of a mousse) or just whipped cream (with cocoa or cinnamon powder). Gelaterie serve gelato to go either in individual portions (in cones or disposable cups), or larger quantities in insulated containers (priced by the liter and considerably cheaper than the equivalent amount bought in individual portions; in some cases empty cones are also available, complimentary or for a fee). More elaborate preparations are sometimes offered, usually intended for sit-down customers (compositions with wafers or biscuits, melted chocolate, whipped cream). Gelaterie, as well as most pastry shops, also may offer ‘semifreddi’ (gelato cakes), and, like many cafés, also use gelato as the base for ‘frullati’ (Italian-style milkshakes), or for ‘affogati’ (gelato drowned in coffee and/or liquors).

As far as flavors go, as we were saying gelato can be of two main types: milk-based (creams – or ‘creme’ in Italian), or water-based (sorbet – or ‘sorbetto’ in Italian), which originated in southern Italy, but is available all throughout the country. Traditional cream gelato flavors include: fior di latte (a neutral gelato base), cioccolato (chocolate), vaniglia (vanilla – which, by the way, has an intense flavor and doesn’t mean flavorless!), stracciatella (fior di latte and chocolate shavings), nocciola (hazelnut), torroncino (from ‘torrone‘), caffè (coffee), pistacchio

and panna cotta (from the corresponding desserts). Traditional sorbets flavors include: limone (lemon), fragola (strawberry), pesca (peach), mango, and other fruits. It has to be noted that even the biggest and most popular gelaterie don’t usually have more than 50-60 flavors, the smaller ones only have 10-20 (a good turnaround is needed since gelato can’t be stored for too long and is usually produced overnight, directly on the premises).

Restaurants also offer gelato as a dessert, either by itself or with fresh fruit. During formal dining, a sorbet is sometimes served as a palate cleanser in-between courses.

Industrially made gelato can also be bought in supermarkets, though this type, slightly higher in fat, is stored at lower temperatures (to extend its shelf life), and needs to be taken out of the freezer ahead of time before being served.

7 thoughts on “Gelato vs. Ice Cream”