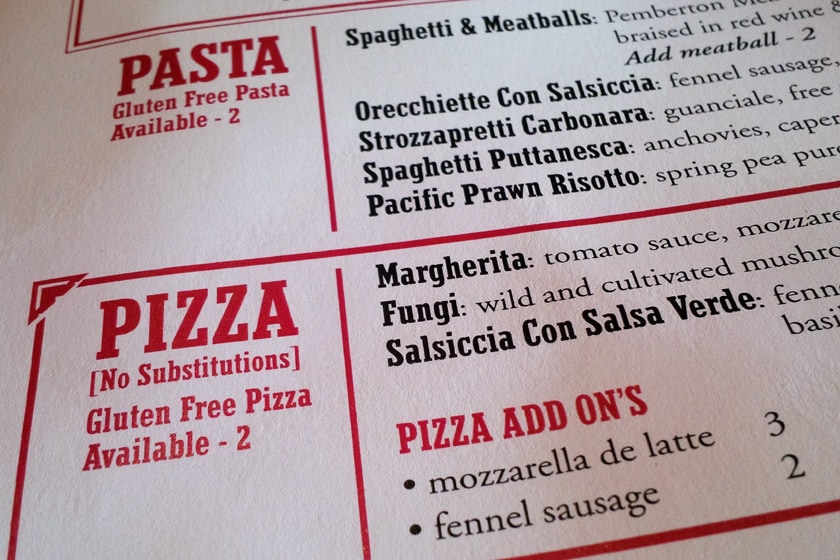 For a narrated version of this article, please check out: Italian Words Gone Wrong – Mistakes on the Menu

Even though Italian food is prominent in North America as well as other English speaking countries, restaurant menus often use Italian words in ways that are not even remotely close to what would sound natural to a native Italian. And it isn’t just because of spelling mistakes, the grammatical and logical use of Italian words is also frequently incorrect.

This post started as a chat with two Twitter friends, Cecilia Razelli (@cocci_ge) and Carlo Settembrini (@csettembrini.) Cecilia found it amusing that I titled one of my articles “Formaggio Cheese,” given that she had noted a similar trend with constructs like “salsiccia sausage” and “prosciutto ham” (if you don’t see why Italians can find this amusing, keep reading!) Then Carlo joined the conversation, expanding to other types of mistakes that English speaking people make when using Italian words. We kept chatting on Twitter for a bit, then we moved the conversation to a shared Google Document, which eventually became the outline for this article. I would like to thank Cecilia and Carlo for engaging in this collaboration – literally, this post wouldn’t have happened without you!

To help illustrate the variety of errors that are commonly made when non-experienced Italian speakers use the Italian language, we grouped the mistakes according to their nature into six distinct families. So, let’s get started!

When native Italians look for authentic Italian restaurants abroad, they often assess their authenticity merely on the number of spelling mistakes they can spot on the menus. Since the Italian language is mostly phonetic (i.e. written as pronounced,) there are no spelling competitions in Italy – spelling is generally not an issue over there(1)! This is why spelling mistakes stand out even more to the Italians.

Some spelling mistakes seem to reflect the way Italian words tend to be pronounced by English natives. Take ‘focaccia’ as an example: its misspelled counterpart ‘foccacia’ is gaining popularity because it’s closer to how it sounds in English. At other times, alternate English spellings appear to reflect the dialect of the first Italian-Americans. Words like ‘Cappicolla’ and ‘Macaroni,’ for instance, bear clear signs of a southern Italian heritage as opposed to their national counterparts: ‘Capicollo’ and ‘Maccheroni.’ Other words, like ‘linguini’ and ‘zucchini,’ reflect a combination of causes: their dialectal origin and the way the correctly spelled ‘linguine’ and ‘zucchine’ sound when read with an English accent.

To a native Italian, it’s bad enough to hear a misspelled word, but things get even worse when the alternate spelling has a different meaning in Italian. For instance, ‘panini’ is sometimes misspelled as ‘pannini.’ Now, while ‘panini’ is a diminutive of “pane,” which means ‘bread,’ the word ‘pannini’ is a diminutive of ‘panni,’ which is equivalent to “items of clothing” or “rags.” So now you know why a native Italian may get a giggle when they read that the chef’s special is the “house pannini.”

Even when spelled correctly, Italian words may be misused in the context of a sentence because of an incorrect “grammatical number.” A classic example of this mistake is using the word ‘panini’ (which is the plural of ‘panino’) to refer to a single sandwich. It’s not clear why the plural ‘panini’ entered the English language instead of the singular ‘panino,’ although one theory is that ‘panini’ is assonant with other Italian-sounding words like ‘linguini’ and ‘zucchini.’ Regardless, a sentence like “I’d like a panini” sounds to a native Italian as wrong as “I’d like a sandwiches.” And it goes without saying that the word “paninis” doesn’t make any sense to a native Italian since it’s a double-plural. The same mistake occurs when ‘biscotti’ is used to refer to a single cookie (in Italian it’s the plural of ‘biscotto.’) The word ‘gelati’ instead is often used interchangeably with the word ‘gelato,’ when in reality it’s its plural form and should be used when referring to two or more Italian ice creams.

When using the English language, however, nobody is expected to use Italian grammar. Therefore, words like ‘paninos,’ ‘gelatos,’ and ‘pizzas’ are perfectly acceptable. In fact, Italians do the same with English words: they adopt the singular form and use it interchangeably both as singular and as plural (“un computer, due computer” = ‘one computer, two computers.’)

In the Italian language, nouns have gender. Moreover, articles and adjectives must match the gender of the nouns they are used with. Because of this, besides knowing if nouns are plural or singular, in order to write proper Italian one must know the gender of nouns. Luckily, most of the times it’s easy to tell if a word is masculine or feminine: if it ends in ‘a’ it’s feminine; if it ends in ‘o’ it’s masculine (this for singular words, for plural words it’s ‘e’ for feminine, ‘i’ for masculine.) So, for example, because ‘pizza’ is feminine, one should say ‘pizza classica,’ not ‘pizza classico.’ And it’s ‘pasta ai gamberi,’ not ‘pasta alle gamberi.’ Consistency is important!

Many Italian dishes bear colorful names also thanks to the use of descriptive adjectives. As an example, ‘Bolognese’ means “from the city of Bologna.” When native Italians use words like ‘bolognese’ to refer to the famous kind of ragù (a generic word for meat sauce), they say “alla bolognese,” meaning “in the style of the city of Bologna.” Although it’s acceptable to say “Bolognese sauce” (“salsa bolognese,”) it doesn’t make sense to say: “I’ve had pasta with Bolognese” (leaving out the noun.) The sentence: “I’ve had Bolognese pasta” is also likely incorrect since it means “I’ve had pasta from the city of Bologna” with no reference to its sauce. Worse yet, if you order “a Bolognese” in a restaurant, it will sound like you are ordering a person from Bologna – that would be a very dubious kind of meat sauce!

Similarly, ‘Parmigiano’ or ‘Parmigiana’ means “from the city of Parma” (referred to a masculine/feminine subject respectively.) As for the famous eggplant dish, however, it’s equally correct to say “melanzane alla parmigiana” (“parmesan eggplants”) or “parmigiana di melanzane” (“parmesan of eggplants,”) the latter using ‘parmigiana’ as a noun.

And to conclude this category of mistakes, let’s not forget that the word ‘balsamic’ is an adjective, and it means “curative,” or “having the same properties of a conditioner” (‘conditioner’ = ‘balsamo’ in Italian.) It makes no sense to an Italian to use ‘balsamico’ without a noun or a pronoun. So, you can’t have anything like “I’ll have balsamic on my salad.” Balsamic what?

As for the origin of this construct, it may come from the North American practice to use generic product names combined with specific adjectives. For instance, people say “cheddar cheese,” or “tuna fish,” when really ‘cheddar’ or ‘tuna’ can’t be anything other than ‘cheese’ and ‘fish’ respectively.

Interestingly, however, ‘gelato ice cream’ is technically correct since gelato is not exactly Italian for ice cream: it’s a particular kind of ice cream (denser, less sweet, and less fat.) Because of this, it may be justifiable to use ‘gelato ice cream’ as a marketing strategy to indicate a specialty product (likely to be sold at a higher price.)

Also technically correct is ‘espresso coffee’ since ‘espresso’ is indeed descriptive of a distinct kind of coffee extraction. In Italian coffee bars, however, people just call it ‘espresso,’ or even simply ‘coffee’ since the coffee sold in coffee bars is almost exclusively espresso. When ordering a coffee, Italians also often shorten the name when they order an espresso variation, which comes with its own descriptive adjective. Examples are ‘corto’ (short), ‘macchiato’ (stained or spotted with steamed milk,) ‘corretto’ (corrected with liquors or spirits,) etc. Sometimes they even leave out the noun altogether and order directly a ‘macchiato,’ which ironically also happens in North America.

The construct: ‘ricotta cheese,’ instead, is completely wrong since ricotta is technically not even cheese (being it made from whey, and therefore considered just a dairy product, or ‘latticino’ in Italian.)

In the Italian language, the following are generic names as well:

To end the list of mistake families, we can’t leave out one of the most mysterious ones exemplified by the Italian-American dish called Shrimp Scampi. Scampi, plural of scampo, is a crustacean similar to a small lobster. For some reason, it also became the name of a preparation (based on tomato, garlic, and white wine) that is generally used for shrimp and other crustaceans. But if “Shrimp Scampi” makes no sense to a native Italian because it’s essentially “Shrimp Shrimp,” Olive Garden’s Chicken Scampi makes even less sense, since it’s like saying “Chicken Shrimp.”

Sometimes Shrimp Scampi is instead used to refer to a crustacean, possibly just to make a dish sound more mysterious, or “elevated,” and definitely more “Italian.” Dishes like “Linguine with Shrimp Scampi” from “Barefoot Contessa” Ina Garten are a clear indication of how mainstream this misconception has gone. It goes without saying that actual Scampi are nowhere in the ingredients.

To make matters worse, dictionaries such as the Merriam-Webster define ‘scampi’ as “a usually large shrimp; also: a large shrimp prepared with a garlic-flavored sauce,” also reporting ‘scampi’ as a singular noun with an invariant plural form. Fortunately, heroic bloggers like my friend Frank Fariello set the record straight by correctly explaining the naming issue behind this dish.

To end the category and this article, ‘Calamari’ is another example where non-native Italians may confuse an ingredient with its preparation. Whereas in Italian it generically means ‘squid,’ outside of Italy, and especially in North America, it refers to its deep-fried ring-shaped slices.

(1) In some regions of Italy, Italians make certain kinds of spelling mistakes due to how words sound in their dialects. As an example, those who speak a Venetian dialect tend to drop double consonants. In southern Italy, instead, double consonants tend to be added where they don’t belong (e.g. Carabbinieri instead of Carabinieri.)