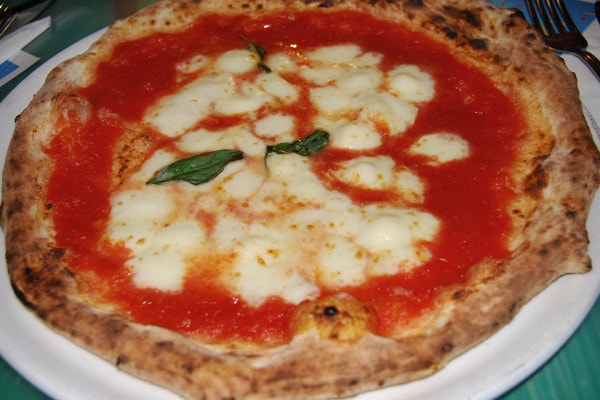 Everybody knows pizza, in a form or another, and so does for sure every Italian.

In Italy, a ‘pizzeria’ (a restaurant specialized in serving pizzas) is the default for low-commitment dining, a place for every time Italians don’t feel like cooking (especially -for some reason- on Sunday nights). A traditional pizza is an affordable and reliable delicacy, and it’s something that can’t easily be made at home.

Most people when going out for pizza, just get one pizza (usually with a beer or a coke) and they’re done. There could be appetizers, especially if the wait is going to be long, and desserts at the end. Typical pizzeria appetizers are: bruschetta

. Espresso coffee is almost a must when ending the meal, often accompanied by a liquor, such as limoncello

Delivery service exists, especially in the big cities, whereas in small towns pick-up is probably more frequent. Regardless, pick-up and delivery only represent a small percentage of the Italian pizza business (pizza degrades quickly when not eaten right away, especially in the cardboard box – when it comes to pizza most Italians prefer to eat out).

There is, however, one type of pizza that Italians may take home and reheat, or get to go and eat right away as street food: it’s Pizza al taglio (pizza by the slice). This type of pizza (“bakery-style”, thicker, cooked in rectangular trays and sold in squares) can be a real treat but doesn’t compare with traditional pizzeria pizza.

So, let’s talk some more about traditional pizza. Other than being thin crust, traditional pizza has to be cooked very quickly (in about 90 seconds), traditionally on the stone of a wood-fired brick oven (at 485 °C or 900 °F), and has to be made with high quality toppings such as fresh strained tomatoes and fresh mozzarella (also known as bocconcini) – the base of 95% of Italian pizzas. The other toppings depend on the style, and every pizzeria chooses what to put on the menu – some pizzerias may have more than a hundred types of pizza. Pretty much every pizzeria, however, also serves a number of traditional pizzas, which are always a big hit. The most important are:

Most Italians simply pick one of the many pizzas on the menu, or just make slight variations (e.g. double mozzarella, added fresh tomato slices, or added oregano). Some order a Margherita with an added topping or two, effectively making their own. This, however, is not very popular because Italians are very careful in combining ingredients – if two or three toppings go well together, chances are that their combination has a name and is already on the menu.

In any case, the number of toppings should always be moderate. Italians don’t feel cheated if the toppings layer isn’t much thicker than the crust itself – the crust is not a tray that has to be filled up as much as it can hold! And if there’s meat, it should never be more than one kind (there is no meat lovers pizza in Italy).

One last important thing to consider with toppings like cold cuts (e.g. prosciutto crudo), or greens (e.g. basil o arugula), is that they have to be added at the end as they shouldn’t be cooked.

Which leads to a Top Five list of the most common mistakes made in North America when imitating traditional-style pizza: