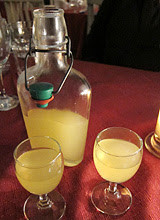 Limoncello (pronounced: lee-mon-chel-low) is a sweet, lemon-flavored liqueur made by soaking lemon peel in pure alcohol to extract its aromatic oils. Straight chilled limoncello is served after dinner as a digestive, or to accompany a dessert. When mixed with tonic water or sparkling white wine, limoncello can also make for a refreshing aperitif.

The origins of limoncello

Lemons made their first entrance into the Mediterranean region as early as 100 BCE. Around 1000 CE cultivated lemon trees were common in Italy, especially in the regions of Sicily, Calabria, Campania, Sardinia, and Liguria. Despite the availability of lemons and a proven Italian tradition in liqueur production, it took until the beginning of the 20th century for limoncello to be invented. The exact birthplace is unknown, with many of the areas renowned for its production claiming its paternity. These include:

The boom of limoncello

Thanks to its unique lemon flavor (intense, but not sour), and to its relatively low alcoholic content (around 30% in volume), limoncello became very popular in Italy and gradually spread to most of Europe. The highest peak of popularity was reached between 1990 and 2005 in Italy when limoncello became fashionable as the digestive of choice, a must at the end of every restaurant meal, and of every home dinner with guests. Many Italian restaurants started to offer it free of charge after coffee, even by leaving a bottle at each table for the guests to help themselves to. While generally appreciated by the diners, the trend eventually wore out and lately limoncello, although still popular, is back to being one of the many digestive liqueurs (which are rarely complimentary in restaurants).

Part of the success of limoncello is also due to its simple and reliable production process – many Italian families produce their own using a variation of the following recipe.

Note. When choosing the lemons, it’s extremely important to go for the highest possible quality. The best lemons are medium-large, with an elliptical shape and a thick peel. The lemons must be untreated (we are going to only need the skin!) – any pesticides or even just waxing (commonly applied to help preserve the citrus’ moisture) would end up in the finished product.

Disclaimer. In certain areas of North America, pure alcohol can only be sold to professionals who have a special license! This is the case in many American states and in all of Canada except for the province of Alberta, where it’s sold under the brand name “Everclear”.

4 thoughts on “The Boom of Limoncello”