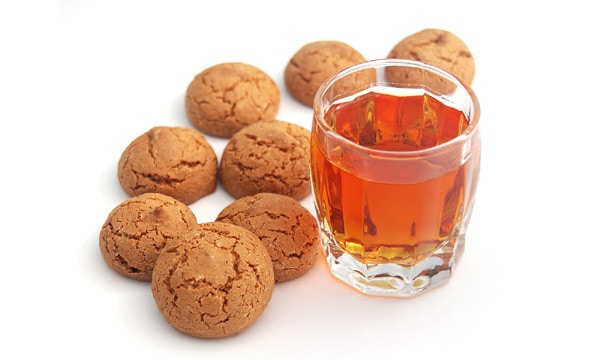 Check out the latest episode of Thoughts on the Table, the podcast on food and food culture. Also available on iTunes and Google Play Music.

Amaretti cookies and Amaretto liqueur are both well known in Italy and have been gaining popularity worldwide. The word ‘amaretto’ comes from the Italian ‘amaro’ (bitter) in reference to the sharp flavor of bitter almonds. Despite the name, both products are predominantly sweet, and their bitterness only enhances the flavor depth. Amaretti cookies are a treat to eat on their own, or they are used as an ingredient in desserts and even in some savory dishes. The Amaretto liqueur is a classic accompaniment to coffee at the end of a meal or used in cocktails, long drinks and to flavor hot chocolate. This article considers both the cookie and the liqueur, starting from their key ingredient: bitter almonds.

Bitter almonds differ from sweet almonds far more than in bitterness. Sweet almonds were born as a natural mutation of bitter almonds lacking amygdalin, a compound that is found in the kernels of many stone-fruits (apricots and peaches included). When such kernels are crushed, the amygdalin breaks down into glucose, the aromatic benzaldehyde (which is responsible for the sharp almond flavor), and the highly toxic hydrogen cyanide (HCN). Each bitter almond may contain an average of 6 mg of HCN, which, incidentally, is far more than the amount of HCN found in the smoke of one cigarette (0.01 to 0.4 mg) and which can seriously harm an adult.

When amygdalin is not present, however, benzaldehyde is also missing – sweet almonds lack a lot of the flavor of their bitter counterparts and are impractical for use in the pastry and confectionery industry. In North America, bitter almonds are strongly regulated due to the cyanide content and not commercially available; almond flavoring (extracted from a variety of other sources) is used instead. In Europe, moderate amounts of bitter almonds, as well as apricot kernels (called ‘armelline’ in Italian), are used despite their toxicity after blanching, which reduces the HCN, making them safe (in small amounts) even as an uncooked paste, e.g. to flavor marzipan.

Almonds are native to western Asia and the Middle East and adapted well to the Mediterranean climate, where they still grow naturally. Sweet almonds, possibly identified by the early farmers, have been cultivated since the early Bronze Age (3000-2000 BCE). Nowadays, according to the FAO, California is the largest producer (1.4 million tons in 2010), with Italy coming in 6th (85.500 tons), after Spain, Iran, Morocco, and Syria.

The best example of the use of cooked bitter almonds and/or apricot kernels is in the almond macaroons known as amaretti, of which they constitute 10-20% in weight. The earliest written recipes for amaretti (as early as 1725) describe them as crunchy on the outside and soft on the inside, and made with egg whites, sugar, sweet and bitter almonds. Nowadays, different kinds of amaretti exist – some that follow similar recipes, and some that also contain flour (wheat, rice, corn, or potato) for added body. Texture-wise, amaretti range from soft and mildly chewy to light and crunchy.

Recently, a different but related company: Paolo Lazzaroni & Figli (PLF) also entered the amaretti market with Amaretti del Chiostro Autentici. PLF was founded by Paolo Lazzaroni in 1851; in 1888, his brother, Davide Lazzaroni, started “D. Lazzaroni & C.” (better known as Lazzaroni). PLF historically focused on liqueurs (especially Amaretto, see below), whereas Lazzaroni mainly produced cookies (especially amaretti), both following the original recipe that belonged to the Lazzaroni family well before both companies were founded (since to 1718, according to a legend). Despite the attempt of Lazzaroni to patent their amaretti recipe, PLF was authorized to market their cookies under a different name.

Just like the amaretti cookies, the Amaretto liqueur is also made with bitter almonds or with apricot kernels, this time in the form of an infusion. Since alcohol is particularly effective in extracting the benzaldehyde, there is no hydrogen cyanide in the liqueur, and even no traces of nuts in it, making it safe for those who have allergies. Amaretto has nothing to do with ‘amaro‘, a distinctly bitter herbal liqueur usually had as a digestive.

Being an infusion, the Amaretto liqueur can be easily made at home. Just like for Limoncello, many Italian families make their own by soaking minced bitter almonds (and/or apricot kernels) in pure alcohol (although brandy can also be used).

The historical origin of Amaretto is unknown, but the legend goes that it was invented in Saronno in 1525. According to the tale, a young innkeeper created a concoction of almond and brandy as a gift for the painter Bernardino Luini out of gratitude for choosing her as a model for the painting dedicated to the Virgin Mary, in the city’s sanctuary. The story is also endorsed by ILLVA Saronno S.p.A., the firm that makes the world-famous “Disaronno Originale” (28% vol.), an “Italian liqueur flavored with herbs and fruits soaked in apricot kernel oil”. The company’s name is the acronym of “Industria Lombarda Liquori Vini e Affini”, literally: Lombard Factory of Liquors, Wines, and Similar goods.

Less known outside of Italy, Disaronno’s main competitor is the “Lazzaroni Amaretto” (24% vol.) by Paolo Lazzaroni & Figli (PLF), officially produced since 1851. PLF’s Amaretto owes its “delicate almond/apricot flavor” to an infusion of crushed amaretti cookies, which were made according to the Lazzaroni family’s recipe.

13 thoughts on “Amaretti and Amaretto”