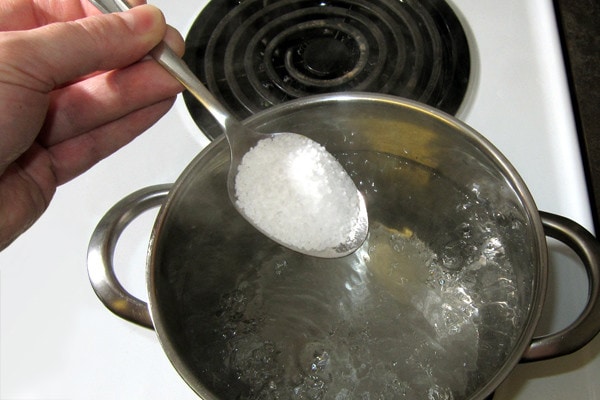 In the Pasta 101 article we went through the different types of pasta and the Italian traditions around it. Let’s now talk some more on how to cook pasta, and particularly dry pasta (‘pastasciutta’).

Let’s start with quantities. How much is one serving of pasta? It depends on the yield. Raw dried pasta absorbs plenty of water as it cooks, easily doubling in weight. Uncooked fresh pasta is instead already moist and only gains moderate weight with cooking.

In Italy, the typical serving per person (of uncooked pasta) is:

In any case, these amounts are very contained with respect to North American standards. This is because pasta is usually just the first course of a meal, and it’s served without a side and never with bread. The amounts of pasta get even smaller when the sauce that is going to be used is particularly rich.

Let’s now talk about the cooking process. Most recipes say the pasta should be boiled in abundant salty water. But what does that mean? How abundant is ‘abundant’ and how salty is ‘salty’? The correct proportions are:

It’s important to note that, despite common misconceptions, the amount of salt is not proportional to the amount of pasta! It’s proportional to the amount of water used. For example, when making pasta for 4 people (250g), it’s necessary to have at least 2.5 liters of water; and, for 2.5 liters of water, it’s necessary to have 2 tablespoons of salt. This may seem like a lot of salt, but the pasta will retain only a relatively small amount of it; the rest of the salt will stay in the water. Besides, salty water also increases the temperature at which the starches gelatinize, making the pasta less likely to stick to itself. By the way, adding table salt at the end on the cooked pasta is not equivalent to boiling the pasta in salty water, as it wouldn’t be able to reach the pasta’s core.

The best way to get the water ready for cooking pasta is to put the pot with unsalted tap water on the stove at maximum heat, covered with a lid. When the water reaches a full boil, the salt is added and should dissolve almost immediately in a burst of bubbles. While dissolving, the salt absorbs energy causing the boil to be interrupted, but only momentarily. The reason why it’s not recommended to put the salt right away in the cold water is that it will dissolve more slowly, resting on the bottom of the pot and, over time, causing some corrosion. Rock salt is normally used in Italy because it is less likely to lump together and because it’s cheaper.

When the salty water is fully boiling, the lid has to be removed and needs to stay off while cooking the pasta (or the water will start foaming and spill over). Even without the lid, the water should maintain a full boil. This is very important because it guarantees a constant temperature (around 100°C), necessary to cook pasta properly. At lower temperatures, the pasta would take longer to cook, absorb more water and become gummy. This unfortunately is unavoidable at high altitudes, for instance at 3000m water boils at 90°C. While it’s true that salt increases the boiling temperature, at typical concentrations it only increases it by 0.17°C, which is absolutely negligible.

It’s now time to “throw” in the pasta (from the Italian saying: ‘buttare la pasta’). Even though the bubbling movement of plenty of fully boiling and salty water is sufficient to keep the pasta separate and cook uniformly, it’s still important to stir the pasta for the first minute of cooking. Some sources suggest adding olive oil to the water to prevent sticking – this is generally unnecessary and actually not recommended as the pasta will be coated with grease and this will prevent the sauce from sticking to it.

How long does the pasta need to cook? For packed dried pasta, what’s written on the box (e.g. ‘cottura 10 minuti’) is a very good indication, starting the timer at the moment when the pasta is added to the boiling water. At ideal conditions (fully boiling water at low altitudes), the time given on the box produces “al dente” pasta, which is still moderately firm and offers some resistance to the bite. Even Italians may find this slightly undercooked, but it’s especially recommended for all those recipes that require the pasta to be tossed back in the pan along with the sauce (adding a couple of minutes to the cooking time). Fresh pasta cooks much more quickly than dried pasta (in the order of a few minutes, versus about 10). In any case, it’s a good idea to taste the pasta before or at its cooking time to ensure it’s cooked properly.

As soon as the pasta is ready, it has to be rapidly drained in a colander, making sure to leave a small amount of the cooking water for extra moisture and also to help the sauce adhere to the pasta thanks to the dissolved starch. Pasta boilers with embedded colanders (where the pasta cooks directly into a colander which fits completely within the pot) can be very practical, but they are regularly used only in professional kitchens.