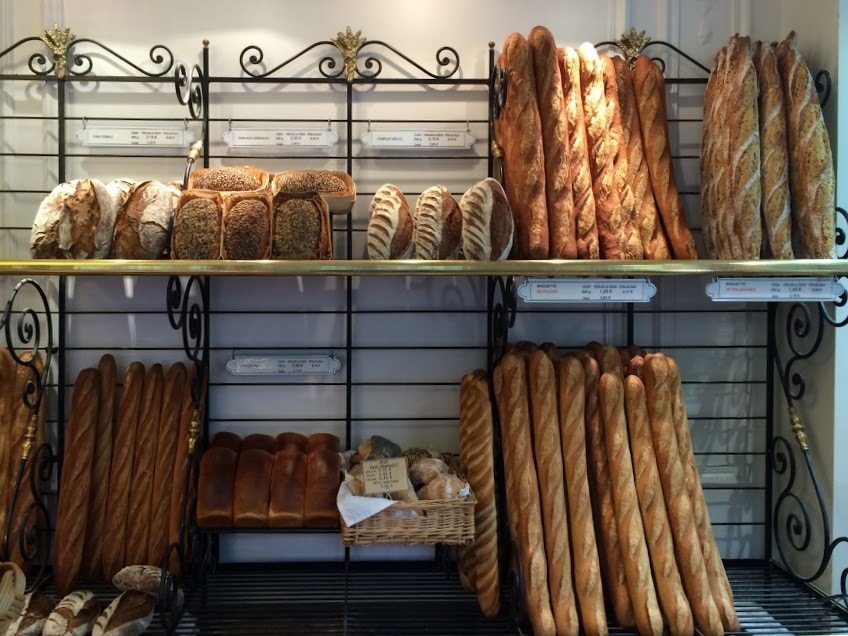 The smell of bread… Freshly baked bread has such an evocative fragrance. Italian bread, just like most artisan kinds of bread, is usually made of just yeast, flour, water, and salt.

Yeast. The kind most commonly used is baker’s yeast, which is also used for brewing alcoholic beverages (in fact in Italian it’s called ‘lievito di birra’, beer leaven). Unlike sourdough (a symbiotic combination of a lactobacilli culture and yeasts that naturally develops when a mix of flour and water is left at room temperature for a certain amount of time, and where lactic acid is produced as a byproduct), baker’s yeast is a cultivated form of just yeast (Saccharomyces) and it’s preferred because not sour.

As part of the leavening process, the yeast eats the sugars contained in the flour and transforms them through an enzymatic process in dextrose and fructose, while producing carbon dioxide (CO2) and alcohol. The CO2 is responsible for the rising of the bread, but the fermentation itself and the caramelization of the sugars that occurs in the oven are responsible for the resulting flavor and smell. To lengthen the fermentation and increase the flavor, a starter (also called pre-ferment or ‘mother dough’) is often used. The classic Italian starter is called biga (a thick mixture of baker’s yeast, flour, and water that gets prepared ahead of time and then added to the fresh yeast). As an alternative, a portion of dough from a previous batch can be used.

Flour. Flour from several kinds of grains can be used (including rye, barley, corn), but Italian bread mostly uses high-gluten wheat flour. The gluten content is fundamental to give “structure” to the bread so that it holds its shape while rising and that prevents it from collapsing during the baking.

The salt is responsible not only for the taste but also for the color of the bread. Common table salt or sea salt is added near the beginning of the mixing process, but avoiding direct contact with the yeast. Tuscan bread is an exception where salt is completely absent.

Now that we have the complex chemistry of bread out of the way, let’s talk about what bread means to the Italians.

Bread is very dear to the Italians; it’s so dear that it is synonymous of ‘good’ (a common Italian saying calls a good-natured person “good like bread”, ‘buona come il pane’). Bread is considered essential to every meal (except of course for meals which are made of bread, like pizza), so much that it traditionally represents the center of the banquet and every other food that is served with it is generally referred as ‘companatico’ (something that goes with bread). And since bread is a given in every meal, it’s free in restaurants (or, better, it’s included with service), and refilled as needed without charge.

Italians eat bread without any butter. As a result, people generally take one bun or bread slice from the basket where it’s served, place it directly on the tablecloth by their plate and eat it with hands, one bite-sized chunk at a time (biting off directly is instead a big no-no).

All Italian bread would probably be considered as ‘fancy’ in North America, there is, in fact, nothing like the standard day-to-day sandwich bread. The closest thing is called “pan carré”, French for ‘square bread’, a long-preservation preparation meant to be toasted, somewhat popular in Northern Italy, but that doesn’t compare with traditional Italian bread.

Bread used to be bought fresh every day at a bakery. And since bakeries used to be closed on Sundays (pretty much like everything else in Italy), on Saturday people would buy double amounts and accept to eat stale bread the next day. Now of course bread can also be bought in superstores, and many people freeze it and every day they thaw the desired amounts (if properly bagged and frozen when very fresh, bread remains almost unaltered for a few weeks).

Is there such a thing as Italian bread?

Not really. Bread in Italy comes in a big variety of shapes and kinds, from small rolls to big loaves, which vary across the peninsula. The most known kinds of Italian bread include:

Special bread featuring the addition of other ingredients (from simple milk or oil to olives, raisins, or grapes) is also quite common. It has to be noted that the law imposes the use of the “Special Bread” label for any kinds of bread containing more than 4.5% of fat.

(not foccacia!) can be considered a type of special bread containing olive oil. The most basic focaccia is simply sprinkled with coarse salt, but there are many variations (even a sweet one covered with sugar). The most famous focaccia comes from Liguria, and particularly the city of Recco (topped with Crescenza cheese).

Panettone is also a type of special bread, definitely the most representative sweet bread, a typical Christmas cake that originated in the city of Milan, but is common all throughout Italy (though usually only around the Christmas time). Panettone contains eggs, butter, sugar, raisins, and candied citrus peel and its complex preparation requires different stages of leavening.

(brus-‘ket-ta, not bru-‘shet-ta!). The most classic bruschetta is topped with diced tomatoes, garlic, onion and olive oil and originates in Central and Southern Italy.

Finally, several preparations are based on stale bread, either diced and softened in milk or grated. One preparation typical of the eastern Alps is Canederli (though originated in Germany and Austria), bread dumplings usually containing cheese and smoked cured meat, served in broth or with melted butter.

One thought on “The Mystery of Bread”