, plural ‘bruschette’ (brus-ket-teh), is a very popular appetizer born in the 16th century in central and southern Italy, which then spread to the entire country and eventually followed the Italian emigrants around the world.

Classic bruschetta can be made in several ways, but it’s always based on a salad of fresh diced tomatoes on a toasted slice of rustic bread. The name bruschetta, in fact, derives from ‘bruscare’, Roman dialect for the verb to toast. Traditionally, a hint of garlic is added by rubbing a peeled garlic clove onto the char-roasted bread. However, it can also be added in small amounts directly to the tomato salad.

Bruschetta can also be made with other toppings (e.g.: cooked beans, stewed mushrooms or bell peppers, tuna salad). In Italy, however, these are substantially less common than the classic tomato topping. Unless otherwise specified, the term ‘bruschetta’ refers to the tomato version and always to the whole preparation (bread plus topping), never to just the topping. So, no bruschetta burger, please!

For the best results, the bread has to remain crunchy. To this effect, the topping should be not too soggy and it should be put on the bread only a few minutes before serving. Some restaurants even have do-it-yourself bruschette, where a tomato salad is served in a bowl along with toasted bread.

This recipe describes a variation of the classic where a few extra ingredients are added.

Yield: 2-4 servings (as an appetizer) 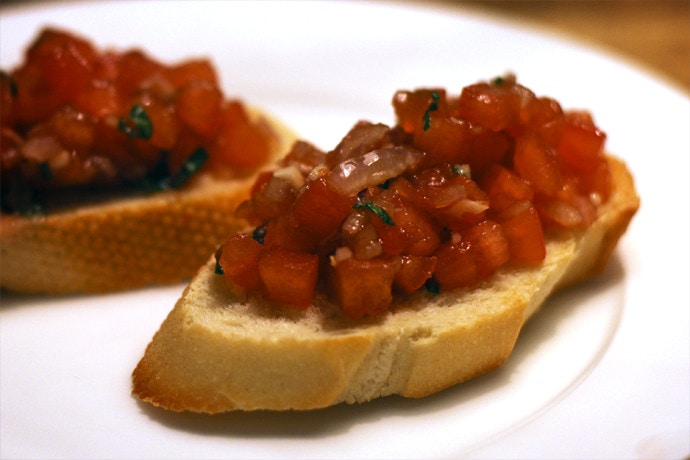