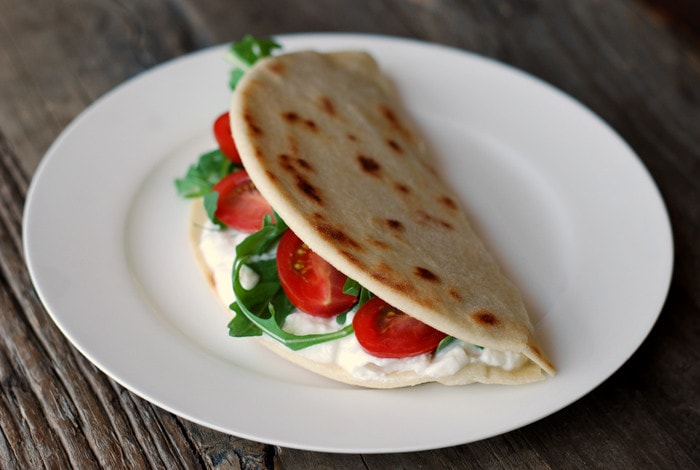 Piadina is a traditional flatbread from the Italian historical region of Romagna.

The name piadina (plural: piadine) is a diminutive form of piada (used interchangeably to refer to the same preparation), which originates from the Greek pláthanon: “long dish, baking tray.” Since 2014, ‘piadina’ is registered as Protected Geographical Indication (Indicazione Geografica Protetta, or IGP, in Italian.)

Traditionally, piadina is made of flour, water, salt, and a small amount of lard (strutto in Italian). For a vegetarian recipe, the lard can be substituted with olive oil or margarine. Through the centuries, from a simple bread alternative, piadina has become an iconic symbol of the Romagna region and a widely popular product. Nowadays, it can be enjoyed in special establishments called Piadinerie (plural of Piadineria), which can also be found in big northern Italian cities outside of the Romagna region.

The piadina can be served as a kind of bread to accompany meals, but it’s more commonly enjoyed folded in half and filled with various cheeses, cold cuts, or roasted vegetables. One of the most popular fillings is Squacquerone (a fresh cheese which has a protected designation of origin from Romagna), prosciutto crudo (dry-cured ham), and rocket (arugula).

Having grown up in the province of Milan, I only became familiar with piadina during one of my family’s summer trips to the Adriatic seaside resort of Emilia-Romagna, a popular destination for Italian and north European tourists who are looking for long sandy beaches, shallow Mediterranean waters, amazing food, and exciting nightlife. I remember trying my first piadina in a small theme park called Fiabilandia, in Rivazzurra di Rimini. It was filled with prosciutto crudo, and for me, it was a welcome revelation—one of the first of the many kinds of Italian regional food that I went on to discover!

This recipe was given to me by a friend who was born in Romagna. It makes use of a small amount of baking soda (sodium bicarbonate) which acts as a raising agent by releasing carbon dioxide at temperatures above 80 °C, making a light, friable flatbread.

Besides cooking, baking soda has many other uses as summarized in this comprehensive article.