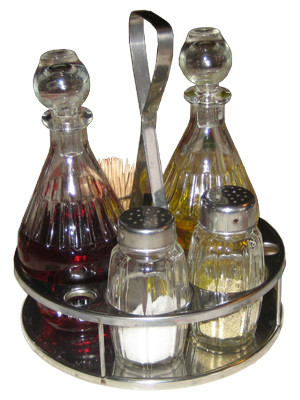 Italian dressing. Obviously you can’t find such a thing in Italy, exactly like you’ll hardly find anything called “Chinese food” in China. But it isn’t just the name that doesn’t exist, Italians don’t even know the concept of a (premixed) dressing that you can buy in a store.

The main reason why Italians don’t buy any bottled dressing is that there is only one really popular salad dressing – a simple mix of oil and vinegar, plus salt. Now, oil and vinegar don’t actually mix… and that is probably another reason why there is no “Italian dressing” in a bottle: it would look gross!

So, how does mixing of oil and vinegar work? They are applied separately; it’s recommended that vinegar and salt go on first (salt dissolves in vinegar, and doesn’t in oil – some people even premix salt and vinegar in a tablespoon before adding it to the salad), then after a quick toss olive oil is added on, just enough to lightly coat the greens and enhance their flavor.

Now, what kind of oil and vinegar? A light olive oil (e.g. a delicate extra-virgin from Tuscany or Liguria, or a less flavorful non extra-virgin olive oil) is generally preferred on delicate greens (such as lettuce). Vegetable oils can also be used. For stronger greens (such as arugula) a fruity and aromatic extra-virgin is instead recommended. As for the vinegar, regular red wine or white wine vinegars are the most common, but balsamic vinegar is becoming more and more popular. Balsamic vinegar originates in the regions surrounding the cities of Modena and Reggio Emilia. It’s now also made elsewhere, but the one produced in Modena and Reggio Emilia is certified as Protected Designation of Origin, and guaranteed to be made using traditional methods. As an alternative to vinegar, lemon or other citrus can be used to add acidity.

Instead of bottled dressing, households always have oil, vinegar, salt and pepper on the table as, generally speaking, people prefer to dress their own salad themselves. The same goes for restaurants and cafeterias – oil and vinegar are brought to the table whenever a salad is ordered and the waiters never ask what kind of dressing the customer would like.

Italians love their salads, but they normally have them only as a side to the second course (which is normally meat or fish), or at most as an appetizer. Unlike in North America, salad is never served as a side to a pasta or rice dish. Lately, “big salads” (‘insalatone’) have become a popular lunch choice, they usually have some leafy greens with a combination or all of the following: corn, canned tuna, hard-boiled egg slices, ham, cheese dices (e.g. Fontina or Swiss). Big salads’ dressing is normally the usual oil and vinegar, or just oil.

There is absolutely no Caesar salad in Italy.