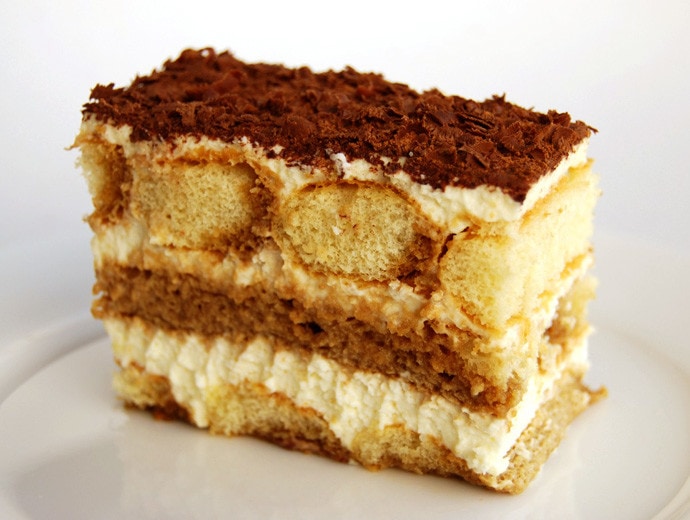 Tiramisu (or Tiramisù, as written in Italian) is arguably the world’s most popular Italian dessert after gelato. Featured by many Italian restaurants in North America, Tiramisu is for the Italians more of a homemade party cake and an unpretentious dessert found in pizzerie and trattorie.

What is the correct pronunciation of “bruschetta”? Check out this and other often mispronounced Italian words.

Even though Tiramisu is a modern creation and many claim its paternity, its origins are actually unknown. The consensus is that Tiramisu as we know it became popular in the 1980s, possibly as a variation of the British trifle in which ladyfingers (called ‘savoiardi’ in Italy) and a cream of mascarpone are used instead of sponge cake and custard. Part of the dessert’s success may be due to its odd name. Although it’s the subject of another debate, most concur that it originated in the literal meaning of the Italian words ‘tirami su’: “pull me up” or “pick me up,” possibly referred to the “uplifting” or even “aphrodisiac” effects of coffee and chocolate.

As described in the recipe below, Tiramisu is commonly flavored with rum (or brandy), coffee and cocoa powder. However, around Italy, there are also versions with very different flavors (e.g. amaretto and peaches, or limoncello and strawberries).

All versions of Tiramisu are centered around a mascarpone filling which traditionally contains raw eggs (as in the recipe below). There are also egg-less versions in which the mascarpone is blended with whipping cream and sugar, resulting in a richer, but also heavier dessert. North American versions often contain more sugar than their Italian counterparts.

For the coffee dip

*Harold McGee. On Food and Cooking: The Science and Lore of the Kitchen. 2nd edition (2004).

22 thoughts on “Tiramisu, the Uplifting Dessert”