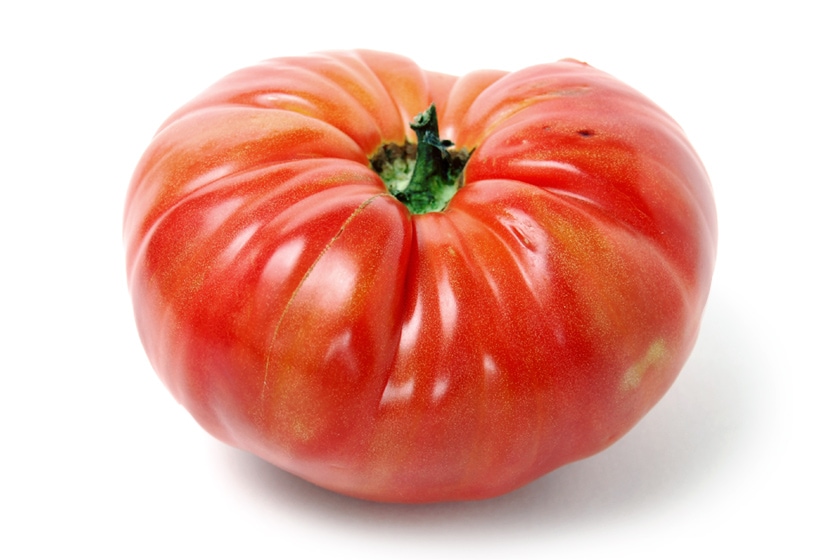 Everyone who has visited Italy agrees – Italian tomatoes are much more than a condiment for burgers or a colorful decoration! They are indisputably full of flavor, a fundamental part of the diet of the Italians, and a defining ingredient in their cuisine.

Originally domesticated in Mexico and only brought to Europe by the Spanish traders in the 1700’s, similar tomato varieties are found in both North America and Italy. Why is the flavor so much different then? The composition of the soil and the exposure to sunlight are certainly involved, but the determining factor in the difference of flavor is that most tomatoes found in North America have been cut while still green to facilitate distribution. In Italy, instead, they are generally grown locally and allowed to ripen on the vine. Note that tomatoes sold “on the vine” in North America may still have been separated from the plant well before ripening.

For the fruit and vegetable industry, the advantage of unripe distribution is enormous. Green produce is easier to handle – it doesn’t bruise as easily and doesn’t need to be delivered as promptly. However, only climacteric fruits(1) (of which tomatoes are part) have the ability to ripen after they have been cut. During their development, climacteric fruits store sugar in the form of starch. When they are fully grown, the plant starts producing ethylene, a colorless gas that operates as a phytohormone in organizing the ripening process. When exposed to ethylene, fruits increase their respiration and the accumulated starch is converted back into sugar. During this process, the fruits themselves start producing ethylene, which in turn creates a ripening cycle that affects the entire plant and the ones nearby.

Ethylene can also be artificially supplied to picked unripe produce with a similar ripening effect. This allows the fruit distributors to maintain the produce green until it’s about to reach the shelves, and then gas it to cause it to ripen. Unfortunately, despite their mature appearance, fruits that have been cut too early severely lack flavor. Moreover, these fruits tend to have a shorter shelf life than their naturally ripened counterparts.

Among climacteric fruits, bananas, avocados, kiwis, and pears can fully ripen after being picked – there is no particular advantage to allow these fruits to ripen on their trees. On the other hand, tomatoes, apples, apricots, peaches, plums, mangoes, figs, cantaloupe, and nectarines keep on improving the longer they stay attached to their plants.

Non-climacteric fruits like citrus, pineapples, strawberries, and melons don’t store sugars in the form of starch and, when cut off their vines, they arrest their development and only start to degrade, rather than ripen(2).

Tomatoes had a very slow diffusion in Italy. In addition to their late introduction, they encountered a strong resistance due to their resemblance to the botanically related and highly poisonous nightshade. It took until the beginning of the 20th century for tomatoes to become popular. At that point, however, they became so deeply intertwined with Italian cuisine, that they changed it forever. They brought a depth of flavor that never before was found in a vegetable, and it’s nowadays impossible to imagine Italian food without tomatoes.

The remarkable complexity of tomatoes is well represented by their distinct parts, each contributing in different ways to the flavor.

Most of the tomato flavor lies in the outer wall (the sweetest part) and in the cuticle (the thin and resistant skin). The jelly and juice surrounding the seeds are instead acidic. As a result, seeded and peeled tomatoes lack flavor and acidity. In cooking, it’s recommended to keep all parts of the tomato fruit together(2), and then strain the resulting product to eliminate any unwanted seeds and skins.

The proportions of skin, walls, jelly, and seeds vary across the different cultivars. Therefore, each of them has different culinary uses. Here are some of the most common Italian preparations that are normally associated with the main tomato varieties. To be noted that tomato juice as a drink is not listed since it isn’t popular in Italy.

(Round, smooth, and flattened at the top and bottom. Generally 4-celled, with plenty of juice and seeds.)

Tomatoes are healthy, both raw and cooked. While raw tomatoes contain higher levels of Vitamin C, the antioxidant lycopene (the carotenoid responsible for the red coloring) is boosted by the cooking process and protects the human body from the cell and tissue damage caused by free radicals.

Partly or barely ripe globe tomatoes are used in salads, either by themselves, cut into slices or wedges, or with other veggies (e.g.; cucumbers and bell peppers). Salt, vinegar, and oil are normally used as a dressing. Globe tomatoes are also excellent when paired up with fresh cheese, such as mozzarella, bocconcini, fior di latte, cottage cheese, or burrata. Caprese salad, for instance, consists of tomato and mozzarella, with olive oil and optional basil or oregano. Green globe tomatoes are pickled in vinegar and oil and had as a side.

(Big and irregularly shaped, wider than tall. Multi-celled, moderately rich in juice and seeds.)
The stupendously flavorful coeur the boeuf is used in big slices in salads or in sandwiches.

(Small and 2-celled.)
Also used in salads, whole or halved, fully ripe Campari or cherry tomatoes are added to meat or fish stews.

(Oblong and smooth, more “mealy” and with fewer seed compartments.)
Strained raw plum tomatoes are used on pizza. Their mealy texture makes them not as appealing to be eaten raw, but they are the preferred choice for all tomato sauces, generally flavored with onion, or with garlic (as in ‘marinara’), or with chili pepper (as in ‘ arrabbiata’, which also has garlic). Plum tomatoes are also best for canning, either strained, chopped or whole (usually peeled, as in the typical “pelati”). In the south of Italy, where in the summer the production of tomatoes often exceeds the consumption needs, canning of strained tomatoes (“passata”) is a common family activity.

(1) Tomatoes are fruits, being the development of the flowers’ ovaries and containing the plant’s seeds.
(2) Harold McGee. On Food and Cooking: The Science and Lore of the Kitchen. 2nd edition (2004).