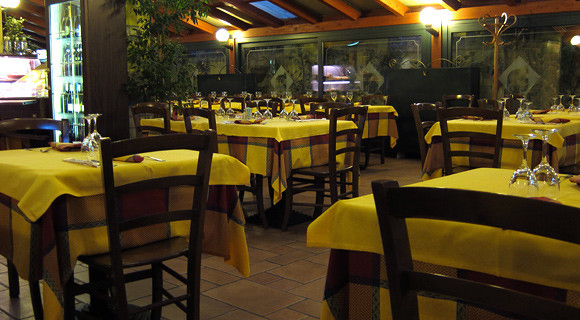 Table service, the customer experience in restaurants, can be radically different between Italy and Canada. Most of my considerations can probably apply to all of North America, but in this article, I will be referring specifically to my Canadian experience.

In Canada, the ideal customer’s expectation of good service is to be treated like a guest at a friend’s house. When successful, the relationship between host and guest is warm and friendly. The restaurant staff’s goal is to make their guests feel at home by making themselves constantly available, should the customers need anything.

At the end of the meal, in return for the many courtesies, the guest leaves a tip according to a tradition designed to reward good service with an act of generosity.

In Italy, when dining in, a service charge (usually 10%) is automatically added to the bill. It represents an actual fee, not a gratuity, explicitly named in the cheque as the cost of cover and service (‘coperto e servizio’). The extra charge is meant to account for the rental of clean tableware and linens, as well as (part of) the waiters’ wages.

The relationship between customer and waiter is therefore quite business-like: the waiter takes the order, serves the food, and the customer pays for the service. Because of this, Italians don’t have a problem with calling the waiter when they need it – they know it’s the waiter’s responsibility to assist. As a result, the waiters don’t need to constantly check on the tables.

Which way is better? The friendly exchange of courtesies or the contract? Each of them is the norm in their respective countries, and whether you prefer one or the other likely depends on where you were raised. The different type of customer service, however, can become problematic when the two cultures mix.

What should Italians expect when traveling to Canada? They will be surprised by how friendly the service is. They should not mind the many interruptions throughout the meal – waiters will offer free water, constantly re-filling the glasses, and will periodically check if the guests are liking the food (when asked, guests should just say the food is good unless really they don’t like it and want to send it back). At the end of the meal, they shouldn’t be surprised to have the cheque automatically brought to them without asking (something that would be considered rude in Italy, like a way to ask them to leave). The bill is generally left *face down* on the table for a reason, it’s perfectly fine to ignore it until ready to pay, before leaving.

However, tipping is supposed to be proportional to the quality of the service and, in its essence, optional. Practically, though, since waiters are often paid minimum wage, it translates into paying the server an expected percentage (nowadays, 15% and up). Not leaving a tip, or leaving a tip that is substantially lower than what is customary, is equal to making the harsh statement that the waiter can’t do their job. Since Canadians hate to make harsh statements, they will always leave a tip, and will just avoid restaurants where service is poor.

What should Canadians expect, then, when traveling to Italy? They should expect it to be a bit rough, but they should try to focus on the food and keep in mind that, as they pay for service, they have the right to demand attention if it’s not given to them (the Italians even have a saying: ‘chi spende pretende!’, those who spend demand!). Just like on an airplane they have the right to ask for an extra pillow if they so wish. Since it’s considered rude in Italy for the restaurant to talk about money when people are still seated at the table, at the end of the meal Canadians should expect to have to ask for the cheque. In fact, the Italians even have a special “scribbly” way of waving when calling for it!

In Italy, the waiter is, fundamentally, the connection between the customer and the food. If the food meets the client’s expectations, and the waiter brings the food to the client, then the waiter meets the obligation implicit with his role. The waiter can still exceed expectations, for instance when they are particularly knowledgeable about the food, or when particularly attentive to the customers, and this can certainly increase the image of the restaurant. In many cases, however, the service in restaurants just meets minimum expectations. Those restaurants can still be highly successful, provided that their food is highly regarded. It’s a matter of offer and demand – but on the market of good food.

Finally, Italian restaurant owners in Canada have to keep in mind that the expectations are different than back home. While authentic Italian food is generally highly appreciated – the Italian standards of customer service are generally highly despised. No matter how good the food is, if customer service is not up to Canadian standards, the restaurant can very rapidly build a negative image, and its success can be severely hampered.