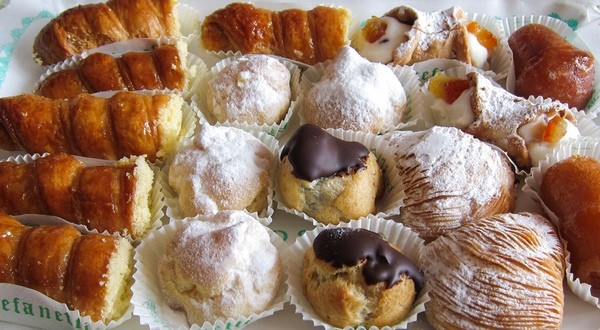 Pasticcini are exquisite Italian fine pastries which have been perfected over the centuries to achieve the best flavors, textures, and fragrances. In the Italian tradition, assorted pasticcini are served as a dessert, as a treat to accompany coffee, tea, or hot chocolate, or as a cake alternative for celebrations and other special occasions (in which case they are usually accompanied with ‘spumante’, the Italian sparkling wine).

The word ‘pasticcino’ is a diminutive of ‘pasticcio’, which in turn derives from Vulgar Latin pasticium, a dish made by mixing various ingredients, mostly wrapped in dough (‘pasta’).

Pasticcini can be found in two sizes: standard (2-3″ in diameter) and mignon (1-2″). The latter has become increasingly popular thanks to its sampling size, a definite plus, given the great variety of pasticcini.

Since fine pastries are difficult and time-consuming to make at home (especially if a variety of kinds is desired), Italians prefer to buy them fresh in a ‘pasticceria’ (pastry shop). Although some bakeries also sell pasticcini, most pastry shops are independent specialized stores, have extended opening hours (they’re often open on Sunday mornings, for any last minute pastry pickup), and sometimes even double as coffee bars.

Along with pasticcini, pasticcerie often also sell shortbreads and other kinds of cookies and dry pastries. Those, however, are called ‘paste da tè’ (tea pastries) and are considered a distinct product. Nevertheless, pasticcini and paste da tè are often served side-by-side to appeal to every palate.

The Italians are traditionalists when it comes to food, and pasticcini are no exception. As an interesting consequence, it’s on traditional pasticcini that most pastry chefs showcase their best techniques. Every pastry chef needs to know how to execute them flawlessly since it is on them that they are evaluated by their customers.

There are several kinds of traditional pasticcini. Some are available all throughout Italy, some are exclusively regional, and some are only made during particular times of the year. The following can be found nationwide (although some have strong regional origins).

Cannoncini (cream horns). Among the most popular pasticcini. Made with a baked horn of puff pastry (‘pasta sfoglia’), generally filled with pastry cream (‘crema pasticcera’), which may be chocolate or hazelnut flavored. They are not to be confused with ‘cannoli’ (see below), although they sound similar because both of their names derive from ‘canna’ (reed), which they resemble.

Sfogliatelle Napoletane. Made of a shell similar to the Greek phyllo dough and filled with ricotta and candied peel. Originally from Naples.

Crostatine alla frutta (fruit tarts). A base of baked shortbread, with a layer of custard, topped with fresh fruit, often covered with gelatin.

Babà. A spongy cake dipped in sugar water and rum. Also traditional to Naples, though with Polish origins.

Cigni (swans). Bigné which have been cut in half and filled with pastry cream (on the bottom) and whipped cream (on the top). A small squiggle of puff pastry is then applied on the bigné to form the neck and head of a swan.

Cannoli. Made of a fried shell, with a ricotta-based filling and flavored with candied citrus peel or chocolate chips. Originally from Sicily.

Fiamme (flames). Drop-shaped mousse (thick foams, generally chocolate-based), on a wafer or a shortbread base, usually covered in chocolate.

Tronchetti (small trunks). Rolls of sponge cake and mousse, which are then sliced in cylindrical sections.

Mini strudel. A small version of the Austrian/German strudel, a kind of pastry filled with apples, raisins, and pine nuts.

Cassatine Siciliane. A small version of the Cassata Siciliana cake, a dessert made with sweet ricotta, sponge cake, almond paste, and candied fruit. Originally from Sicily.

Diplomatici. Layered puff pastry, sponge cake, and custard, which is then cut in squares and sprinkled with confectioner’s sugar.