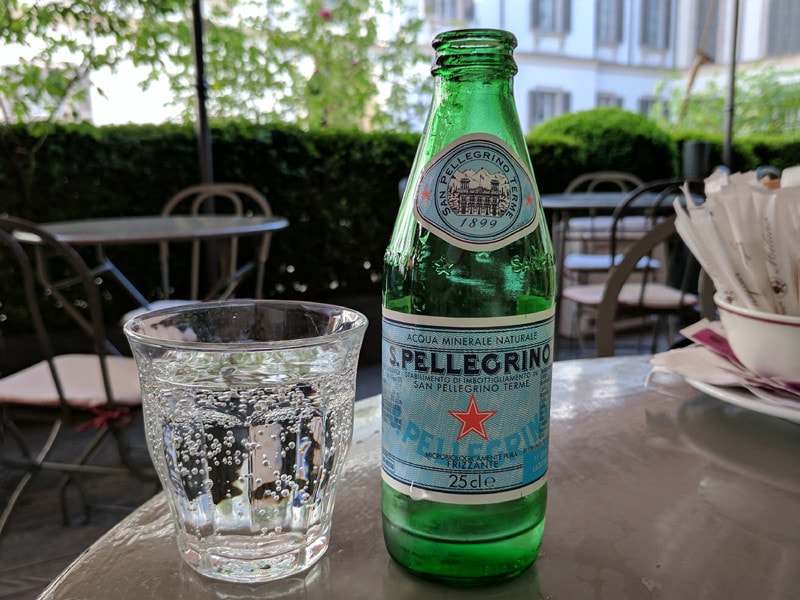 Mineral water is extremely popular in Italy. The major brands of mineral waters are from specific springs, which are sometimes also renowned spas, and therefore have a precise location of origin.

But is mineral water just water? No, it also contains a unique mix of minerals and ions. Every spring is different, and the concentration of minerals can vary substantially across them. Most waters have mild diuretic properties or help digestion, but the composition of some makes them suitable as an aid in treating specific medical conditions. Waters that have low amounts of minerals (“oligominerali,” in Italian) are generally suitable for everyone, but those are under a low-sodium diet still need to pay special attention to the label (which by law must list the full composition.)

Most Italians have their own favorite brands of mineral waters. And even if they don’t, they certainly have a strong preference on whether they like still water or sparkling water. Carbonated drinks, in general, are obtained by adding pressurized CO2, which partly combines with water to form Carbonic Acid (H2CO3). H2CO3 is a weak, unstable acid that spontaneously separates back into CO2 and water when at atmospheric pressure and room temperature. The tingling sensation that comes from drinking sparkling water is caused by the formation of bubbles as well as because a small amount of H2CO3 is still dissolved and gives a slight burning sensation. That’s why carbonated mineral water has more flavor than still mineral water from the same spring.

All mineral water is subject to a mandatory bacterial analysis and certification from a reputable university. As for the bottle, PET is becoming more popular, but glass bottles are still used and preferred for carbonated water because the carbonation can slowly escape from porous PET. In either case, the empties are usually returned to the store where the water was bought, either to be recycled or -in the case of glass bottles- returned to the manufacturers to be reused (washed, sanitized, refilled, and re-labeled).

Even though Italian tap water is suitable for drinking and has good flavor in most areas, it’s more common for households to consume bottled mineral water. This is because of a few different reasons: 1) A good portion of Italians like carbonated over still and home carbonation systems are not very common; 2) There is definitely more appeal for a bottled water certified to come from a natural spring in the mountains than for tap water from decades-old city pipes that has stagnated in a distribution tank; 3) Mineral water is relatively inexpensive in Italy and, because of its popularity, is easy to find and convenient home delivery is often available.

Unlike in North America, restaurants don’t offer complimentary iced tap water. You can ask for it, but normally people order bottled mineral water, sparkling or not. However, by law, every bar and café open to the public has to offer a glass of tap water if requested, even to non-customers.

Imported bottled water is becoming more and more popular in North America, usually in its sparkling version. And since it’s imported water, which was even bottled in Italy, Italian mineral water can be quite expensive. The market is increasing not only because of the appeal of a novelty but also because carbonated mineral water is a zero-calorie option that tastes better than soda water and actually pairs up with food. There are even mineral water tasting classes which give the qualification of Idrosommelier.

To enjoy properly, mineral water should be served chilled and, optionally, with a lemon slice. Ice should be avoided since, as it melts, it would dilute the dissolved minerals as well as the carbonation. Sparkling water is also best from a bottle that has just been opened since the cap causes the pressure from released CO2 to build up, in turn preventing more CO2 from being produced, thus preserving the carbonation.