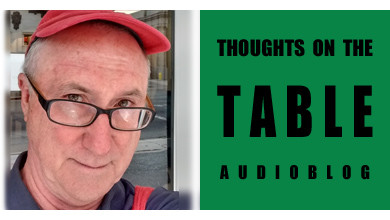 Mark Preston is a food writer, a blogger, and the author of California Mission Cookery, a cookbook on the early cuisine of the Californio population, which he discovered while working as an archivist for the UCLA library.

Last October, he got in touch to tell me about his research on ragù, the Italian meat sauce; he wanted the opinion of an Italian on what he had found. This is how we started collaborating!

In this episode, Mark talks about his encounters with Italian cuisine while growing up in St. Louis, Missouri, and how this experience prompted him to travel to Europe, as he says, “just to go to Italy to eat!”

He also analyzes how the popularization of the Mediterranean diet may have caused a shift in preference from Thai to Italian in Los Angeles, where he now lives.

Finally, he reveals his thoughts on what, in the fifties, caused the Americans to go crazy for pizza! A trend which of course goes strong today.

To end the episode, Mark shares one of his best Italian-inspired recipes: Crayfish Simmered Shrimp and Pesto Penne with Cherub Tomatoes, and invites everyone to try making it!

12 thoughts on “[Thoughts on the Table – 53] The Boom of Italian Food in the US, with Food Writer Mark Preston”