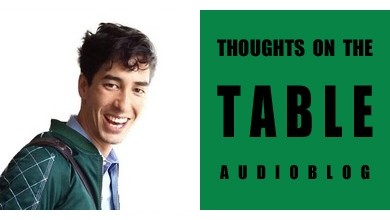 Jason and I used to be co-workers and in our lunch breaks we often talked about food, trying to explain the logic behind it, and comparing North American, Italian, and Japanese cultures. Being an avid podcast listener, and missing the days when I was an amateur radio host in Italy, I pitched to Jason the crazy idea of making a podcast from our chats. Of course he accepted without hesitation! As a result, Thoughts on the Table was born just over three years ago.

Even though Jason is no longer a co-host, the podcast continues to thrive, thanks to its notable guests and loyal listeners – including Jason himself, of course. In fact, I’m very happy to be publishing episode number fifty (that’s five-zero!) today.

In this special episode, Jason is back on the show with one of his topics. With our usual investigative approach, Jason and I theorize on why North Americans seem to focus on high ranking foods (the so-called “proteins”), relegating the rest of the dish to mere accompaniments, whereas the Italians – and the Japanese – value dishes in which the various components are paired harmoniously, and they have meals in which the dishes follow one another in a balanced progression.

As always, please join us in our discussion and let us know what you think by commenting on the episode. Thanks to everyone for your support and feedback!

The music in the episode is by: www.purple-planet.com.