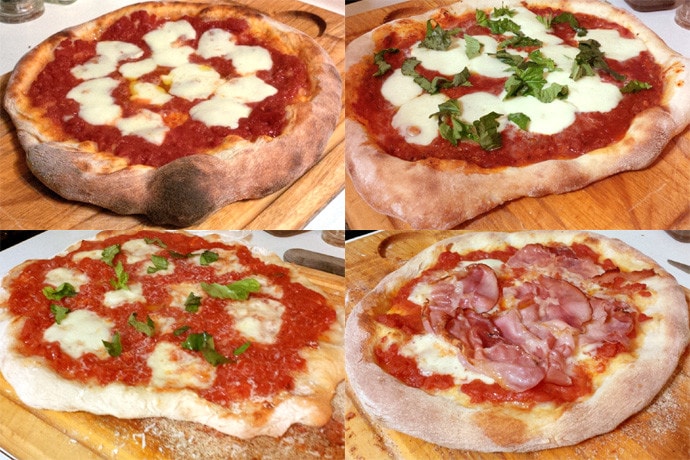 An unusual post for this blog, today. Three friends of mine have just competed in a pizza cook-off, and I had the honor to be the head judge 🙂

The contestants were responsible for bringing their own ingredients, including their pizza dough (which they made beforehand). To cook the pizzas, they all used the same oven, set at its maximum temperature (550 °F), with the same pizza stone.

We had two challenges: the first was on ingredients and technique; the second on the choice of the toppings.

For the first challenge, everyone made their best Margherita. Here is what each did.

The first contestant, Stefano, brought a slowly-leavened pizza dough which he had raising in his fridge for 2 full days (see below for his recipe). He used canned, peeled whole San Marzano tomatoes (which he seasoned with salt and olive oil), and fresh “bocconcini” mozzarella. The pizza was assembled and cooked for 7 minutes (until the mozzarella started to become bubbly). 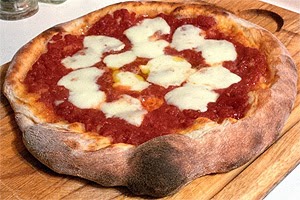 The second contestant, Sandro, used his 1-day leavened dough. He blanched and strained fresh Roma tomatoes, which he then seasoned with herbs, salt, and olive oil. He also used fresh “bocconcini” mozzarella, but he adopted the strategy to add it to the pizza only during the last 2 minutes of cooking (out of the 8 minutes total). He then finished the pizza with basil leaves. 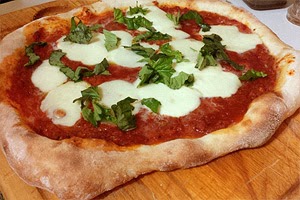 The third contestant, Samuele, also made a 1-day leavened dough. He used canned Molisana strained tomatoes, with some added salt. He used “bocconcini” mozzarella, added at the beginning of cooking, like Stefano’s. He finished his pizza with basil, a hint of Parmigiano, and a generous amount of olive oil. 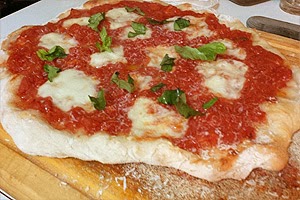 Here is how this challenge went.

All three contestants used a bit too much tomato sauce. Stefano had the best dough of all three. Sandro’s dough was a close second. Stefano’s tomatoes were good but slightly under-seasoned. Sandro’s tomatoes had the most flavor but were a bit watery (possibly because he used fresh tomatoes). Samuele’s tomatoes were the best of all three, although he put a little too much salt on them. Overall, Sandro’s mozzarella tasted best: being it cooked just slightly, it kept its milkiness, tasting more authentic. Overall, Sandro won this challenge.

For the second challenge, the contestants were asked to show off their best toppings.

Stefano went with a proven combination: speck and fontina. He prepared his Margherita base, with fontina mixed in with the mozzarella. Half-way through the cooking, he topped up the pizza with slices of speck. 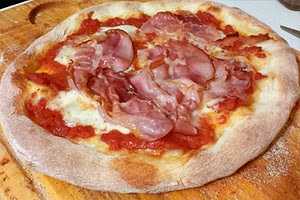 Sandro also used his Margherita base, to which he added sautéed onions and gorgonzola cheese. After the pizza was cooked, he topped it off with raw prosciutto. 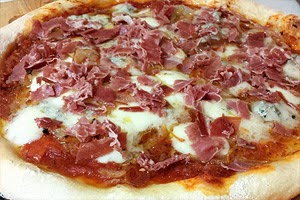 At this point, we were all too full, and Samuele decided to drop out of the competition 🙂

Overall Sandro’s toppings were considered more creative and with a more distinct flavor then Stefano’s; also because Stefano’s fontina was too mild and we couldn’t really taste it. Sandro also won the second competition!