Welcome to Thoughts on the Table, the audioblog on food and food culture! Join me and my notable guests to talk about Italy and the Italians, and to discuss the differences between the food of modern, continental Italy and its interpretations around the world. If you enjoy the podcast, please show your support – subscribe today! 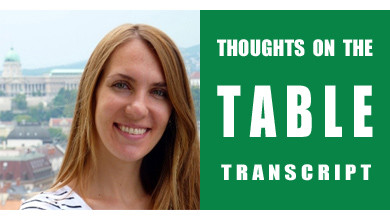 [Thoughts on the Table Transcript] The Italian Wine Culture, with Diana Zahuranec

Last summer, in a podcast episode Diana Zahuranec discussed the differences between Italy and North America in how wine is produced, as well as socially perceived. Diana also went over Piedmont’s native grape varieties and wine appellations. As part of Thoughts on the Table Transcripts, this post contains the textual version of Diana’s episode.   … END_OF_DOCUMENT_TOKEN_TO_BE_REPLACED

Continuing on the series of transcripts, up next is the textual form of an old episode with my friend, writer Gino De Blasio. In this podcast, Gino applies his amazing storytelling to describe the origins of the Slow Food Movement, in response to the fast-food orientated mentality that was spreading in Italy in the ‘80s. … END_OF_DOCUMENT_TOKEN_TO_BE_REPLACED 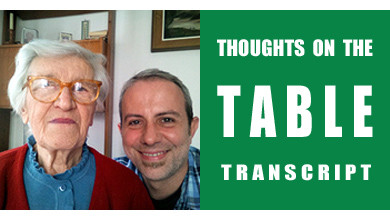 Back in May 2014, I published an unusual episode of Thoughts on the Table, but also an episode that meant a lot to me. I had just returned from a trip to Italy, where I had a chance to record a conversation with my grandmother, Chiara, on her life in northern Italy during World War … END_OF_DOCUMENT_TOKEN_TO_BE_REPLACED

Back in March 2014, I had the pleasure of having Frank Fariello (Memorie di Angelina) on a podcast. In the episode, we discussed the differences between Italian-American cooking and the food of Italy, a topic on which Frank is remarkably insightful, being a third generation Italian-American who lived in Rome for 10 years. This post … END_OF_DOCUMENT_TOKEN_TO_BE_REPLACED