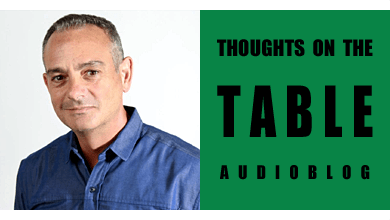 Andrew Cotto is an award-winning American writer of Italian descent. His latest novel titled Cucina Tipica tells the fascinating adventure of a young American who falls in love with Tuscany and with the culture of its people. Naturally, food and wine end up setting the pace and become deeply entrenched in the story.

I was humbled to be contacted by Mr. Cotto who sent me a copy of the book for consideration as he thought it would fit with the theme of the podcast. After reading it, I couldn’t agree more! Please join us in this episode where we discuss the novel in its many aspects–from the significance of food in the Italian culture to the chemistry of taste, from culture shock and relocation to speaking a foreign language and what it does to interactions and introspection.

As an “appetizer” for the book, Andrew sent me a recap in the form of a Food and Wine Plot Menu with 24 tastes each corresponding to a food scene in the novel. Enjoy!

Cucina Tipica: An Italian Adventure
A Novel by Andrew Cotto

Novel Overview: Cucina Tipica is the story of a disheartened American who arrives in Italy on holiday and decides he never wants to leave. What follows is a wine-soaked, food-filled travel adventure about one man’s quest for an antiquated existence in the modern world.

Characters:
Jacoby Pines – a forlorn young American with a “golden palate” and hopes of redemption in Italy
Claire – a travel writer and Jacoby’s fiancee
Bill – a septuagenarian ex-pat from Texas and Jacoby’s wingman in the “adventure”
Paolo – Jacoby and Claire’s neighbor and landlord in the hills south of Florence near the village of Antella
Dolores – Claire’s “outrageous” English cousin and “Chiantishire” resident
Helen – An Aussie/English ex-pat and Florence museum guide

1st Taste:
Who: Jacoby and Claire
Where: Excelsior Palace Hotel – Rapallo, Italy
Food: Prosciutto, cheese, olives, dried lemons, fresh figs
Wine: Prosecco
Additional Notes: They ate with their hands and drank from the bottle, leaving stains and crumbs on the bed sheets, which Claire attempted to clear before removing her bikini bottom…

2nd Taste:
Who: Jacoby and Claire
Where: A “hole-in-the-wall” seafood osteria in Rapallo
Food: a basket of lightly fried calamari, shrimp, bream and whole anchovy seasoned with salt and lemon; pureed and garlicky fish soup; steamed prawns dipped in aioli; grilled sardines; plates of pasta with pesto and plates of pasta with clams
Wine: Carafes of Vermentino
Additional Notes: They shared the meal of seafood by the seaside in the Rapallo back alley as completely as possible, holding hands under and above the table, kissing frequently, filling each other’s glasses, and laughing throughout the two hours of slow and utter indulgence.

3rd Taste:
Who: Jacoby and Paolo
Where: The terrace behind Paolo’s villa featuring a wood-burning oven
Food: Handmade pizza with olives, anchovy fillets, and fresh basil; “Misto Arrosto” – a mixed roast of lamb, sausage, rabbit, liver in caul fat, guinea hen, halved-potatoes, heads of garlic, caramelized carrot and fennel.
Wine: “Local Chianti” – DOCG Colli Fiorentini, Grappa
Additional Notes: Jacoby felt as peaceful and inspired as he had in months. Maybe ever. The best two meals of his life had been had over the first two days in Italy. The country itself was more beautiful than pictures could capture. The people spoke a lovely language and wore elegant clothes. It was all good. And he wanted in.

5th Taste:
Who: Jacoby and Claire
Where: An elegant agriturismo in Le Marche
Food: Charcuterie plate of house-cured meats; silky thick noodles topped with black truffles; lamb roast; Pecorino cheese drizzled with honey
Wine: Rosso Piceno
Additional Notes: After dinner, they roamed the silent grounds and made love on a pool-side chaise lounge after skinny dipping in the cool water that rippled with shards of silver moonlight.

6th Taste:
Who: Jacoby and Claire
Where: The tiny piazza in Panzano-in-Chianti
Wine: Brunello di Montalcino
Additional Notes: Claire tucked into Jacoby’s side and put a foot up on the bench against the back of her leg. They silently swirled the wine and took small sips, staring at the valley beyond the village that burned gold with smoldering sunshine of a fading afternoon. Jacoby savored the apple smell of Claire’s radiant hair and the feel of her lithe body pressed into his. He thought that they, in that still pose, would make a great statue, like a modern Apollo and Daphne, frozen in marble so that their love would always last.

7th Taste:
Who: Jacoby, Claire, Dolores
Where: Restaurant in Panzano owned by a young butcher (inspired by the auspices of Dario Cecchini)
Food: Bistecca Fiorentina, uccellini in brodo (white beans with tomatoes in broth)
Wine: Vecchie Terre di Montefili – Chianti Classico
Additional Notes: The flavor of the beef was as profound and complex as any Jacoby had ever tasted. Steak in the States was bland, in need of sauce, but this simply-prepared choice cut was perfectly grilled – seared on the outside, rare and warm internally – helped by hints of lemon and rosemary and coarse salt while letting the flavor of the meat itself dominate. Amazing. Transcendental. Good f****** lord.

8th Taste:
Who: Jacoby, Claire, Dolores
Where: Terrace behind the barn where they lived on Paolo’s property
Food: Eggs with prosciutto and sage, bread
Wine: Prosecco
Additional Notes: Jacoby loved cooking for people, then sharing the meal and the mutual pleasure of being together. Eating the same food; drinking the same wine; everyone on the same stage. It was like sex when sex was good and mutual. What people called “making love.”

10th Taste:
Who: Jacoby and Bill
Where: Hotel Floria-Zanobini, Antella
Food: Sausage and eggs with stewed tomatoes
Drink: Espresso
Additional Notes: “I’ve been an ex-pat for 35 years, and the only thing I miss about America is breakfast,” – Bill

11th Taste:
Who: Jacoby and Bill
Where: Hotel Floria-Zanobini
Food: Spring Minestrone (generous with pieces of artichoke, asparagus and carrots in a broth of pureed onions and leeks with a snap of garlic); fresh fettuccine with fava beans and Pecorino; rabbit loin wrapped in pancetta over polenta dotted with green olives
Drinks: Negroni, Chianti Colli Fiorentini, Grappa
Additional Notes: Bill and Jacoby ate and drank and spoke of their looming adventure into Florence proper, in search of a matriarch holed up in a palace marked by a cat statue. They laughed at their dim prospects, which were soothed by the magnificent meal and flowing wine.

12th Taste:
Who: Jacoby and Bill
Where: Florence, food stand near the Sant’Ambrogio market
Food: Lampredotto sandwiches
Wine: Chianti in plastic cups
Additional Notes: The aroma out of the stand was pungent; the sandwich warm in his hand, of tomato infused broth and hearty filling tucked between the bread. The taste was super savory to the bite, ample aromatics and a soft texture from the holy trinity of bread and filling and broth.

13th Taste:
Who: Jacoby, Bill, Helen
Where: Florence, a gazebo in Piazza Signoria
Wine: Prosecco
Additional Notes: “Why, yes. Yes, I would,” Helen said. “There’s few things I prefer more than a glass of Prosecco.”

16th Taste:
Who: Jacoby
Where: The barn
Food: Steak & eggs
Additional Notes: Tears fell down Jacoby’s face as he continued to chew enough to swallow safely. The salt from the tears entering his mouth brightened the flavor, making it more clear what was happening even before Claire descended the stairs in the same clothes she wore before, a suitcase thumping beside her.

17th Taste:
Who: Jacoby
Where: Al fresco table at the cafe in Antella
Food: Ceci and bread
Wine: Chianti Colli Fiorentini
Additional Notes: “Ciao,” Jacoby called before tucking into his plate of oven-baked chickpeas that tasted as flavorful as anything he’d ever eaten, washing the legumes and bread down with the local red wine as he sat in the cool shadows of his own private dining terrace on a Friday night in a silent village as twilight settled upon him in what felt like the most important place in all of the world.

18th Taste:
Who: Jacoby
Where: Osteria in Pienza
Food: Pici with porcini; pappardelle with wild rabbit ragu
Wine: Argiano Vino Nobile di Montepulciano
Additional Notes: In a shaded osteria at the end of town, Jacoby couldn’t decide between two pastas… so he ordered both, taking the mushroom plate first, followed by the gamy second course, both washed down with separate, massive goblets of Vino Nobile, which he swirled and sipped with great delight.

19th Taste:
Who: Jacoby
Where: Enoteca la Fortezza, Montalcino
Food: A plate of Pecorino in three varieties
Wine: Il Poggione Brunello di Montalcino (2007)
Additional Notes: When it was over, Jacoby felt a thread of sadness which he hoped to dash through the purchase of a case of the very wine he just drank.

20th Taste:
Who: Jacoby and Bill
Where: A cantinetta near Antella
Food: mixed antipasti; tagliatelle with porcini; roasted pork ribs; cantuccini…
Wine: Colli Fiorentini Riserva, …Vin Santo
Additional Notes: “That was incredible” Jacoby said. Bill made a face of modest expression and flicked a wrist in the air. “Cucina tipica,” he said.

22nd Taste:
Who: Jacoby
Where: Hotel Floria-Zanobini
Food: Cinghiale ragu over polenta
Wine: Il Poggione Brunello di Montalcino
Additional Notes: The meat was as tender as it was flavorful, filling his mouth with silky decadence buttressed by layers of flavor only attainable through days of preparation that precedes slow, slow cooking.

23rd Taste:
Who: Claire & Dolores
Where: Hotel Floria-Zanobini
Food: Cinghiale ragu over polenta
Wine: Il Poggione Brunello di Montalcino
Additional Notes: “My f****** God!” Dolores’ voice shot from the kitchen. “This is the best thing I’ve ever tasted in my life!”
Jacoby and Claire cracked up and parted their hug.
“Bring it in here,” Jacoby called.
“No f****** way!” Dolores called back.