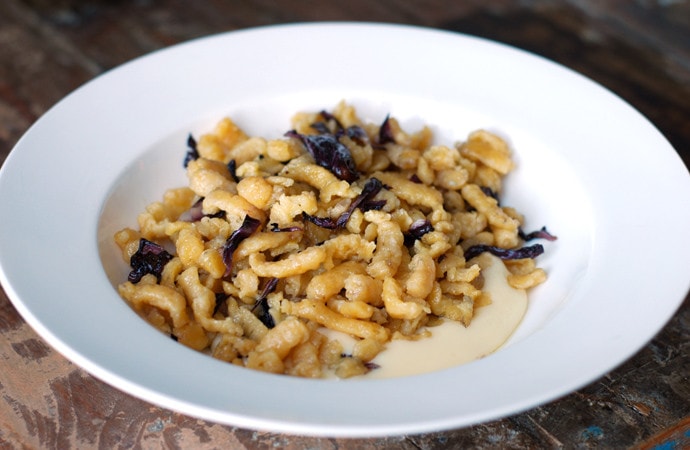 Passatelli are a variation of “stracciatella”, an ancient soup that can be found in various parts of Italy. To make stracciatella, a mix of egg, cheese and (optional) breadcrumbs is whisked into boiling broth, resulting in bits of ripped dough that resemble small tore rags (“straccetti”). To make passatelli, instead, the dough is forced through a heavy perforated iron, resulting in irregularly shaped short noodles of variable thickness (their name comes from “passare” = to go through). You can see the passatelli iron in action in this youtube video produced by a local television in the Romagna area. Passatelli are a classic dish of the Emilia-Romagna, Marche, and Umbria regions, where they are traditionally boiled in broth and served as a soup.

Since the passatelli iron is nowadays hard to find (even in Italy), some suggest using a potato ricer with large holes. You can see it demonstrated in the second part of the same video. While this can be effective, it produces noodles of uniform thickness, removing that irregularity that is characteristic of the dish.

For my interpretation of passatelli, I made use of a spaetzle maker, which is fairly common in kitchen stores (and on amazon.com). The resulting passatelli are slightly shorter and thinner than they should be, but I found that they work especially well when served dry, as opposed to in a soup.

As for the proportions between the ingredients, I went with the original recipe presented by Pellegrino Artusi in his famous recipe book: Science in the Kitchen and the Art of Eating Well, which was first published in 1891. This differs from modern day passatelli which generally feature equal amounts (in weight) of breadcrumbs and Parmigiano. Also, Artusi calls for a small quantity of bone marrow “for extra softness,” which is no longer used. Instead, I kept the idea, but replaced the bone marrow with softened butter.

Even though I followed Artusi’s proportions for the dough, I served the passatelli according to a more modern tradition. Particularly, I tried to replicate the presentation suggested in the video mentioned above, in which boiled passatelli are drained and sauteed in butter with a small amount of radicchio, and then served over a light cheese fondue. The result was truly amazing! A very successful dish that can totally be the star of the show in a rustic and cozy meal.

7 thoughts on “Spätzle-style Passatelli Sauteed with Radicchio, on Cheese Fondue”

#Canederli, prepared together with @kelly_leonardi

First homemade cinnamon rolls for me! Thanks @ital

My wife's amazing shahi paneer, with peppers. And

Cod stew, #merluzzo in umido, with #polenta. A bit

As the post-Brexit trade deal is finally reached,

Gnocchi two ways! Made during a team workshop with

Back to our favorite! #nationaltrust #polesdenlace