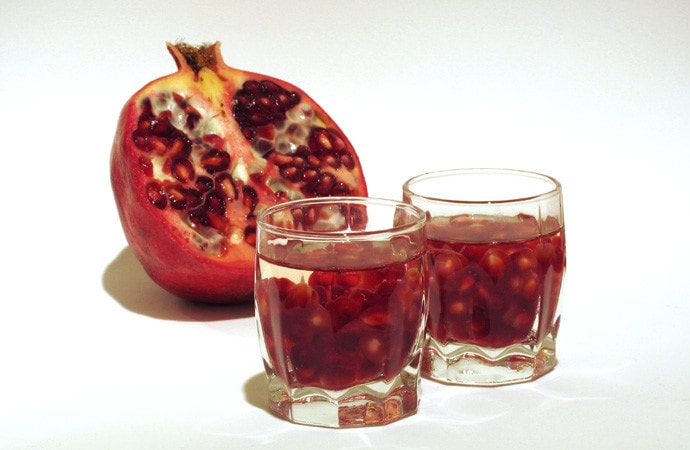 If you’ve only tasted grappa a few times and you found it a bit too dry, you will enjoy this spectacular after-dinner treat of pomegranate seeds soaked in pure grappa.

The sweetness and the tartness of the pomegranate perfectly balance the harshness of the grappa, which becomes sweeter and more palatable. In return, the grappa lends some of its alcohol to the seeds, giving them a pleasant “kick”.

Also known as ‘acquavite’ (“grapevine-water”), grappa was born as an unpretentious liqueur made from the byproduct of winemaking (grape skins, seeds, and stems). By the means of distillation and controlled aging, grappa became a more refined product (pun intended!), at par with other fine spirits. Grappa is popular in all northern Italy, and especially in the northeast, where the city of Bassano del Grappa (60 km from Venice) is home to the prestigious brand Nardini.

Straight grappa is traditionally used as a digestive, although its pronounced dryness makes it an acquired taste for most people. More widely appreciated is the use of grappa as a coffee add-in, called ‘correzione’ (“correction”) by the Italians. A caffe corretto (“corrected coffee”) is a traditional twist to the espresso ritual, an after-dinner favorite as it combines coffee and digestive. Aromatized grappa also targets larger audiences, especially in its fruit-infused varieties, such as blueberry (‘mirtillo’), pear (‘pera’), and pomegranate (‘melograno’).

8 thoughts on “Pomegranate with Grappa”