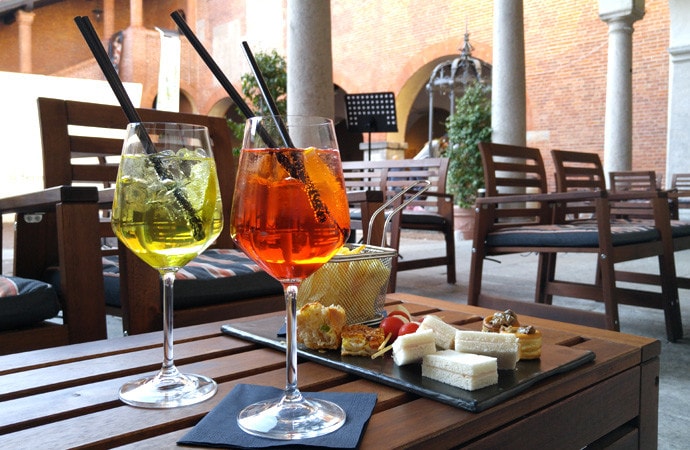 Known in North America by the French name apéritif, an aperitivo is a drink meant to be had before the meal as an appetizer. To this purpose, the apertitivo is usually a moderately alcoholic cocktail based on vermouth, bitters or white wine. Non-alcoholic versions also exist.

Even though the aperitivo is technically a starter to the meal (the word comes from the Latin verb ‘aperire’, to open), Italians usually have it well before lunch or dinner, accompanied by a snack. Because of this, the aperitivo often refers to the whole experience of drink plus food (as Italians say: “fare l’aperitivo”, do the aperitif), with the actual purpose of quenching the appetite while waiting for a late meal.

As described in the article on breakfast, in Italy bars double as coffee shops and are often part of people’s daily routine. And in the bars of Milan and other north Italian cities, the evening aperitivo has evolved into its own tradition. Starting at around 6 pm (which is at least one hour before restaurants open) and continuing until 8 or 9 pm, most bars offer a lot more than peanuts and chips to accompany their drinks. For a slight surcharge on the aperitivo drink, a complimentary buffet of appetizers is commonly offered.

The best aperitivo venues overflow with customers attracted by their luscious buffets and compete in providing the best ambiance and quality. They are especially popular as social hubs, typically for after-work gatherings, while waiting for dinner time. Even though the buffets can be very tempting, generally people try not to take advantage and limit themselves to one or two small appetizer plates. However, aperitivo spots are also appreciated by students and younger crowds in general, which may help themselves more generously and even decide to have more than one round of drinks and skip dinner altogether.

As for the actual drink, all of the standard “pre-dinner” cocktails are served. These include:

But the Italians favorites are bitters-based, they include:

It has to be noted that none of the alcoholic aperitivo drinks are particularly strong. In North America they would all be considered “girly” drinks, also because of their bright colors. Italians enjoy them as appetizers, leaving red wine and beer to accompany dinner, and stronger liquors for later in the night.

Aperitivo drinks can even be entirely non-alcoholic and are quite popular in the morning before lunch. The most common are ‘San Pellegrino Bitter’ (more recently commercialized as ‘Sanbittèr’) and ‘Crodino’, both of which contain herb extracts that give them a bitter aftertaste. They are sold in small individual glass bottles (100 ml) and served on ice with a slice of lemon or orange, or as part of juice-based cocktails.

Pre-made low-alcohol aperitivo cocktails also exist and can be bought in single-dose glass bottles. The most important are Camparisoda (10%, created in 1932) and Aperol Soda (3%).

Every appetizer is served in bite-size portions meant to be eaten directly at the buffet or put on a small disposable plate and taken to the table. Plastic forks and knives are usually provided, though some places limit their customers to using toothpicks and serving spoons.

12 thoughts on “Aperitivo – The Italian Pre-Dinner Cocktail with Accompaniments”