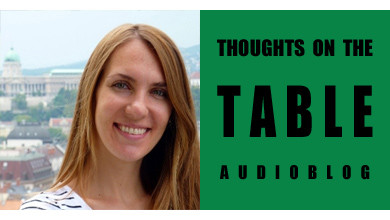 As promised in previous episodes (29 and 34), Diana is back on the show to talk about wine! Join us to discuss the differences between Italy and North America in wine production, as well as in how wine is consumed and socially perceived in the two countries. In the second part of the episode, Diana gives a roundup of Piedmont’s native grape varieties and world-renowned appellations, such as Barolo, Dolcetto, and Barbaresco.

Diana Zahuranec is a writer, editor, and translator at Wine Pass, an online magazine (in Italian and English) on wine and wine tourism in Piedmont. You can also find her on her blog Once Upon a Time in Italy.

5 thoughts on “[Thoughts on the Table – 37] The Italian Wine Culture, with Diana Zahuranec”