Canederli are bread dumplings only found in the north-east of Italy (Trentino-Alto Adige, Friuli, and part of Veneto), where they are served as a first course or as a main entree. Variations of this dish are common in all south-eastern Europe, where they are also served as an accompaniment to meat stews and roasts. The word ‘canederlo’, in fact, derives from the German and Austrian ‘knödel’ (dumpling).

Canederli can be considered part of ‘cucina povera’ (cuisine of the poor), as they are made of simple and inexpensive ingredients: stale bread moistened with milk and bound with eggs and a small amount of flour. However, the mixture is often enriched with cheese and Speck (a kind of smoked prosciutto also local to the north-east regions of Italy).

There are several variations of this regional dish, the following recipe describes one of the most common: filled with cheese. Once the dumplings are prepared and boiled, they are either served “dry” with melted butter or in broth.

To serve them "dry"

To serve them in broth

Note: once boiled, the canederli can be stored in the fridge for up to 3 days, or in the freezer for up to 2 weeks.

If serving the canederli in broth, prepare more vegetable stock (as the one used for boiling will be cloudy because of the flour). Place one or two canederli into each bowl, then pour the broth on them. Finish with some grated Parmigiano and (optional) chives. 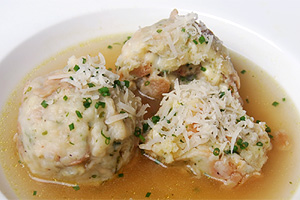 56 thoughts on “Canederli, the Italian Knödel”